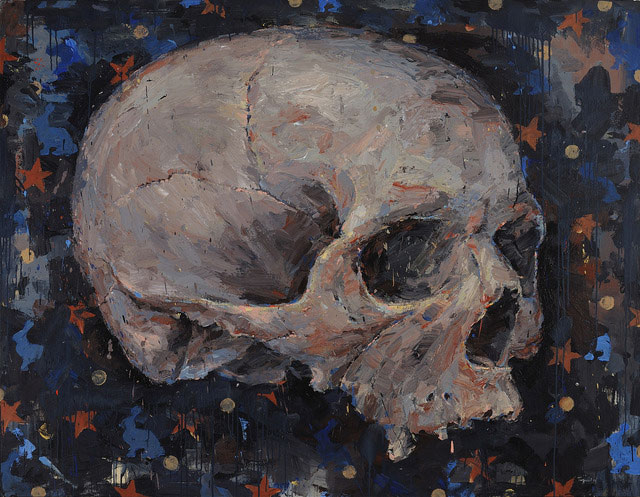 In 2011, Tagreed Darghouth presented Canticle of Death. This solo exhibition at Agial Art Gallery in Beirut, consisted of two series of paintings, apparently independent and ultimately linked by the idea of death: nuclear weapons and skulls. Skulls are not something especially new in art history. In the 17th century, French, Spanish, Flemish and Dutch still life masters applied their virtuosity to depict these anatomical shapes inside compositions that included a multiplicity of objects related to arts, science and wealth. These were the vanities, symbolic artworks taking their name from a verse in the Ecclesiastes:
Vanitas vanitatum dixit Ecclesiastes vanitas vanitatum omnia vanitas.

The Vanitas allege that everything, except the love of God, is futile. In opposition with these sophisticated accumulations, Darghouth’s skulls do not cohabit with anything. They float over an abstract pattern composed of flowers, stars, leaves or dots. Their sinister and frightening presences convey a fundamental menace towards humanity and should be seen in accordance with what (or who) the young artist previously painted. In 2010, Darghouth showed Fair and Lovely, a series of portraits of domestic maids. Fair and Lovely also included pictures of women having been subject to plastic surgery. These were already the main topic of Mirror, Mirror! In 2008.

From Mirror, Mirror! To fair and Lovely, Darghouth was revealing the Lebanese society through its extremes: foreign workers – let’s not say slaves – who only exist to serve their masters, and plastic surgery, very popular among the same masters of these workers. We have a confrontation between the inexistent body and the transformed body that attempted to defy time and death. In this perspective, the Vanitasis an absolute and definitive response.

Tagreed Darghouth was born in 1979. She received a Diploma of higher education in Painting and Sculpting from the Lebanese University’s Institute of Fine Arts, and did a year of graduate studies in Space Art from at the École Nationale Supérieure des Arts Décoratifs (ENSAD), Paris in 2003. She won the Boghossian Foundation Prize, in the catagory of painting, in 2012. She has held a number of solo exhibitions, including Vision Machines: Shall You See Me Better Now?, 2015,Rehearsals, 2013, Canticle of Death, 2011, Fair & Lovely, 2010, and Mirror, Mirror!, 2008, all at Agial Art Gallery, Beirut. And she has participated in various group exhibitions, including “Thin Skin: Six Artists from Beirut,” Taymour Grahne Gallery, New York, 2015; “Insondable Surface,” French Cultural Center, Beirut, 2013; “Re-Orientations I,” Rose Issa Projects, London, 2012; and “10th Anniversary of Kasa Art Gallery,” Kasa Gallery, Istanbul, 2010.

Exhibition is ongoing until 30th of November, 2016