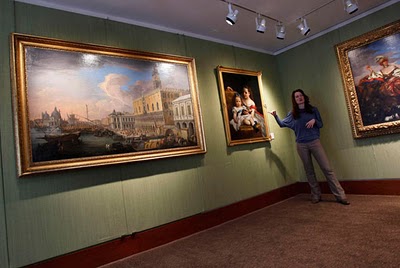 “Master of the Hounds,” by Jean Leon Gerome, had generated significant buzz during exhibitions due to the reviving popularity of Orientalist art, Christie’s said. It had been estimated to sell for between $700,000 and $1 million.

Several bidders competed for the diminutive work, which measures only 13 inches by 9-3/4 inches, effectively doubling the expected price.

The sale’s top lot, as expected, was “View of the Molo, Venice, looking West”, by 18th Century painter Luca Carlevarijs which sold for just over $4 million, in the middle of the estimate range and a new record for the artist.

The first session of the two-part sale took in just over $28 million, short of the $39.8 million pre-sale estimate. Nearly two-thirds of the 74 lots on offer were sold.

While the art market came back strong last year as the financial industry continued to recover following the 2008 crisis and global recession, the Old Master category did not improve from 2009.

According to Art Research Technologies, which uses quantitative methodologies to analyze the art market, the sell-through rates inched up, but the sector’s gross fell by three percent.

But bidding was steady in the salesroom, via telephones and on the Internet, where one bidder in the Britain paid the second-highest price ever for a painting on Christie’s LIVE, $962,500. Another client bid even more — $1.1 million — for a different work, but was outbid.

A new record was also established for Melchior D’Hondecoeter, whose work depicting a peacock, a peahen and other birds sold for $1.65 million.

About 80 percent of the sales went to U.S. and European collectors, followed by South America and Asia, the latter an increasingly important collecting region.

The sale was the first in a week of Old Master auctions at Christie’s, where along with rival Sotheby’s nearly 1,000 works will be hitting the block.

On Thursday Sotheby’s will offer the week’s top-priced work, “A Sacra Conversazione: The Madonna and Child with Saints Luke and Catherine of Alexandria,” circa 1560 and one of only a handful of multi-figured compositions by the Renaissance master Titian remaining in private hands.