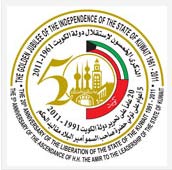 Kuwaiti Society for Plastic Arts (KSPA) announced on February 9, 2011 the start of the fifth Kuwait festival of plastic arts in what coincides with Kuwait’s national celebrations marking the fifth anniversary of the assumption of power by His Highness the Amir Sheikh Sabah Al-Ahmad Al-Jaber Al-Sabah.

The festival also comes on the occasion of the national celebrations marking the 50th Independence Day and the 20th Liberation Day of Kuwait.
Chairman of KSPA and Association of the Plastic Arts Societies of the Gulf Cooperation Council (GCC) states Abdulrasul Salman said in a press conference held at the KSPA headquarters here that “Kuwaiti plastic art went beyond the stage of transfer and recording to the stage of influencing and forming opinions and conventions.”

Salman said: “The society contributed to developing the culture of plastic art with plasticity playing a strong role and effecting the individuals of society as it was no longer used as a term confined to arts, but took a broader scope that included all optical fields in addition to some modern mechanisms required by rhythm of the times.”

He also said that the society prepared further activities and functions to be organized all over the year at the top of them are fifth Kuwait Festival for Plastic Art Creativity, and Kuwait Contemporary Art Exhibition in Ukraine, besidese several personal and group exhibitions inside and outside Kuwait.

Finally, Salman expressed his thanks for, “everyone who contributed to this cultural and national gathering to help us express our sense of security and confidence under the wise leadership of our country.”
(KUNA)

Design Diwan: Drawing The Line – A discussion on ethic...
Dar Al Funoon Gallery: Opening of Roaming Patterns by Abdull...
CAP: Coloring the past