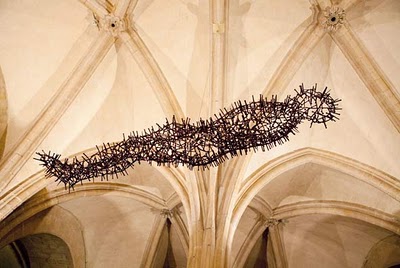 TRANSPORT a new sculpture created by the artist Antony Gormley was unveiled at Canterbury Cathedral. Antony Gormley is credited with a radical re-investigation of the body as a zone of memory and transformation. The two metre long work uses hand made antique iron nails from the Cathedral’s repaired south east transept roof to construct a delicate filter-like membrane outlining the space of a floating body. The membrane is pierced with nails passing through it from inside to outside and vice versa. The work is suspended above the site of Thomas Becket’s vestry place in the Eastern Crypt of the Cathedral.

Speaking about TRANSPORT Antony Gormley said, “The body is less a thing than a place; a location where things happen. Thought, feeling, memory and anticipation filter through it sometimes staying but mostly passing on, like us in this great cathedral with its centuries of building, adaptation, extension and all the thoughts, feelings and prayers that people have had and transmitted here. Mind and body, church and state are polarities evoked by the life and death of Thomas Becket. We are all the temporary inhabitants of a body, it is our house, instrument and medium; through it all impressions of the world come and from it all our acts, thoughts and feelings are communicated, I hope to have evoked this in the most direct way possible”.

Speaking of the Cathedral’s excitement The Dean of Canterbury, the Very Revd Robert Willis said “It is very thrilling for all of us here at Canterbury Cathedral that Antony Gormley has taken the old nails from the roof which was being restored and from them created the statue TRANSPORT. The sense of passage which the word TRANSPORT conveys tunes well with the constant movement of people through this place of prayer and creativity. It also suggests the way in which sacred spaces communicate a sense of time and eternity, of the finite and the infinite. We are hugely grateful for this work.”

In a career spanning nearly 40 years Antony Gormley has made sculpture that explores the relation of the human body to space at Large. He was awarded the Turner Prize in 1994, the South Bank Prize for Visual Art in 1999 and the Bernhard Heiliger Award for Sculpture in 2007. He was made an Officer of the British Empire (OBE) in 1997 and is an Honorary Fellow of the Royal Institute of British Architects, Trinity College, Cambridge and Jesus College,Cambridge. He has been a Royal Academician since 2003 and a British Museum Trustee since 2007.