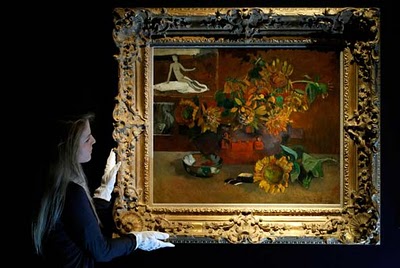 A painting by Paul Gauguin, billed as the top lot at Christie’s auction of modern and impressionist works in London, failed to find a buyer on Wednesday.

The tribute to the artist’s friend Vincent Van Gogh, in the form of a still life with sunflowers called “Nature morte a ‘L’Esperance,” had been expected to fetch up to 10 million pounds ($16 million).

Overall, the auction raised 61.9 million pounds ($99.6 million) including buyer’s premium, according to the company’s website, toward the lower end of the expected range of up to 81 million pounds ($130.4 million).

The auctions are part of a major series of sales in London this month which art market experts are watching closely for signs of strength or otherwise in the booming sector.