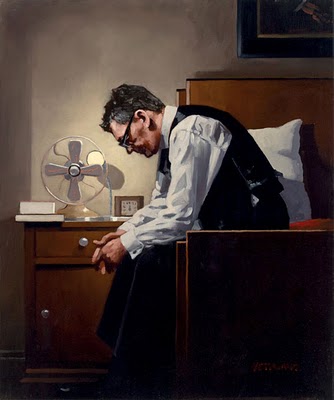 A self-portrait by Jack Vettriano will go on show in the new Scottish National Portrait Gallery when it reopens in the autumn of 2011. Jack Vettriano’s painting, The Weight, which has been offered on long-term loan to the national collection from a UK private collector, will be included within the opening displays. The Scottish National Portrait Gallery will reopen in November after a £17.6 million capital project to renovate and rejuvenate the building.
James Holloway, Director of the SNPG said: ‘Jack Vettriano is one of the world’s best known Scottish artists. I am delighted that his self-portrait will hang in the new Portrait Gallery alongside the faces of the many other famous Scots in our collection.’

Jack Vettriano OBE said: ‘This is a great honour and another benchmark in my career, and for it to happen in my father’s lifetime, makes it all the more special.’

Born in Fife in 1951, Jack Vettriano OBE, left school at sixteen to become a mining engineer. For his twenty-first birthday, he was given a set of watercolour paints and, from then on, he spent much of his spare time teaching himself to paint. In 1989, he submitted two paintings to the Royal Scottish Academy’s annual exhibition; both were accepted and sold on the first day. The following year he entered the Summer Exhibition at London’s Royal Academy. Over the last twenty years, interest in Vettriano’s work has grown and he has had solo exhibitions in Edinburgh, London, Hong Kong and New York.

Portrait of the Nation is the £17.6 million project to renovate and rejuvenate the Scottish National Portrait Gallery, in Edinburgh. It will involve the repair, conservation and creative adaptation of this magnificent Arts and Crafts building, which opened in 1889 as the first purpose-built national portrait gallery in the world.

Starting from an urgent need to restore the building, the project aims to forge an innovative and exciting new gallery. Portrait of the Nation will double the amount of gallery space within the building, and will reinvent the way in which the national collection is displayed. The project will also create a range of enhanced visitor facilities, including an education suite, a resource and learning centre, enhanced dining and retail areas. All of this will be underpinned by an innovative and far-reaching events programme.

The Portrait Gallery collection will be presented in a reinvigorated and more engaging way, illustrating the richness of Scotland’s history and culture with a dynamic and extensive exhibition programme with a new emphasis on photography and Scottish art. It aims to present portraits of people who have played a prominent role in Scottish history or contemporary life. Jack Vettriano’s work has attracted attention across the world and many of his images have become highly popular.