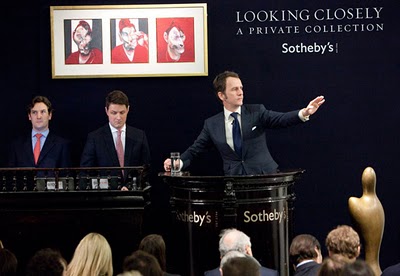 Artist Francis Bacon's oil on canvas "Studies for a Portrait of Lucian Freud" is seen at Sotheby's.

A triptych of British painter Lucian Freud by his friend Francis Bacon fetched 23 million pounds ($37 million) on Thursday at a Sotheby’s auction in London, more than double its high estimate. 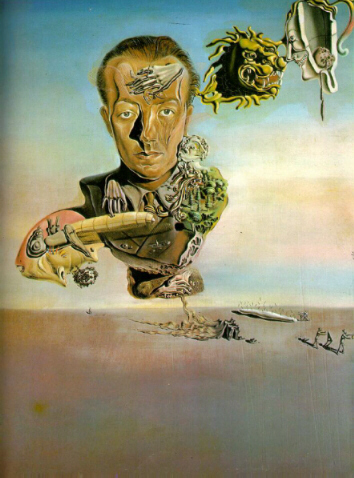 That far exceeded expectations of between 39.3 and 55 million pounds and will undermine confidence among major auction houses that the booming art market can sustain its 2010 bull run after contracting sharply late in late 2008 and throughout 2009.

Dali’s painting had been valued at 3.5 million to 5 million pounds before the auction, but the eventual price tripled the artist’s auction record set earlier in the week.

Yet the real star of the show was Bacon’s “Three Studies for a Portrait of Lucian Freud,” which more than 10 bidders from four continents competed for before it sold to an anonymous bidder in the Sotheby’s sale room.

Bacon and Freud met toward the end of World War Two and soon became close companions. They were at the vanguard of post-war British painting and, with Ben Nicholson, represented Britain at the 1954 Venice Biennale.

“This striking painting has everything a collector in the current market is looking for,” said Cheyenne Westphal, Sotheby’s chairman of contemporary art Europe.

“It is an artwork that radiates ‘wall-power’ with its brilliant color and dramatic brushstrokes. It narrates one of the most impressive artistic relationships of the 20th Century between two titans of British art and is desirably fresh to the market having remained in the same collection for almost half a century.”

The high prices follow the 25.2 million pounds paid for Pablo Picasso’s “La Lecture” earlier in the week, meaning Sotheby’s boasts the three highest prices fetched so far during a major series of auctions being held in London in February.