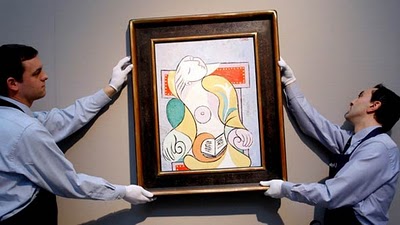 “The Lecture”, a small work by Pablo Picasso, will be auctioned at Sotheby’s in February.

The story behind this painting is absolutely fascinating, not only because it tells of love kept secret between the author and Marie Therese Walter, portrayed in the painting, a muse but most of the Spanish secret lover.

In 2006 threatened to be the most expensive artwork  in the world and was about to be sold for 139 million dollars from Steve Wynn, owner of several casinos. But fate has willed that while the deal has Wynn accidentally damaged the work, causing a small crack in his elbow. After repair, the work was sold at $ 85 million and now the famous auction house has estimated between 12 and 18 million.

A Picasso very similar to a painting which, if it wasn’t for a billionaire’s unfortunate elbow, would have become the most expensive work of art ever, is to appear at auction in London next month.

Sotheby’s announced today that the star lot in its impressionist and modern art sales will be Picasso’s La Lecture, left, a portrait of his young mistress and muse Marie-Thérèse Walter.

It is a significant painting, executed within days of Le Rêve (the Dream) which won notoriety in 2006 when Las Vegas casino owner Steve Wynn managed – in the course of showing its wondrousness to friends – to put his elbow through it causing a six inch tear. He was about to complete the $139m sale of it to hedge fund tycoon Steven Cohen in a deal which would have made it the most expensive work ever. Wynn took the incident as a sign not to sell and after it was repaired it was revalued at $85m.

Another Picasso work, Nude, Green Leaves and Bust, from the same year and with the same subject, holds the current record price paid at auction for a work of art, after its sale for $106m (£66m) at Christie’s in New York in May. Having said that, La Lecture is about half the size of the other two Picassos so it would be a surprise if it became a record breaker. But surprises happen. Not least at the same sale last February when a Giacometti sculpture sold for an eye-watering £65m, setting an unexpected record until the Picasso pipped it in May.

La Lecture has been conservatively estimated at £12m-£18m and Helena Newman, Sotheby’s chair of impressionist and modern art, is confident that, “in its market, it will excite a lot of interest”. Picasso’s first encounter with Marie-Thérèse was in 1927, when she was 17, and the artist spotted her leaving the Paris Metro. He was bewitched. She later recalled: “He simply took me by the arm and said: “I am Picasso! You and I are going to do great things together.”

Because he was married and also because of her young age, the love affair was a well-guarded secret but she appeared in his paintings in code, embedded in the background, until 1931-32 when Picasso could contain himself no longer.In La Lecture, Marie-Therese is asleep with a book in her lap which itself is a sexual symbol. Newman saw the painting up close in New York recently. “It is a fabulous painting,” she said. “Such a beautiful, lyrical, sensual image which all seems to flow with one line.”

Other highlights of the sale include several sculptures such as Giacometti’s Grand buste de Diego avec bras, 1957 – one of a series that the artist made of his younger brother – estimated at £3-5.5m; a 2.2 metre-high piece by Marino Marini called L’idea del cavaliere and regarded as one of the most important works by the artist to come to market; and a Henry Moore, Reclining connected forms, from 1969, estimated at £1.5m-2.5m. There will also be works by Renoir, Manet, Signac, Monet and six other Picasso’s.

The February London sales will see Sotheby’s and Christie’s selling something like £400m of art in a buoyant market for high-end, museum quality works. Highlight of the Christie’s sale will be a Gauguin sunflowers still life, painted as tribute to Van Gogh and estimated at £7m-10m.