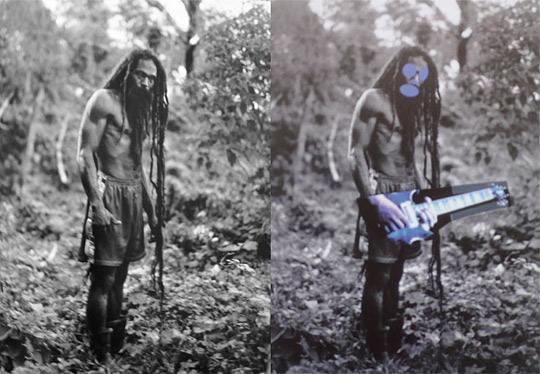 Courtesy of Patrick Carou from ARTINFO.com

In a landmark decision handed down in spirited fashion last Friday, Manhattan federal court judge Deborah Batts ruled against Richard Prince and the Gagosian Gallery in a copyright lawsuit brought by French photographer Patrick Cariou, who claimed that the prominent appropriation artist had unlawfully used his photographs in a series of paintings and other works. The ruling both affects millions of dollars worth of Prince artworks and promises to send tremors though the art community at large, where appropriation has become a widespread artistic strategy despite its often tenuous legality under the United States’ statute of “fair use.”

Filed in 2008, Cariou’s lawsuit stems from photographs that he took of Rastafarians in Jamaica over six year and then published in the 2000 book, “Yes, Rasta.” According to the suit, Prince then lifted 41 images from the book for a series of artworks called “Canal Zone,” which were featured in a Gagosian show that opened in December 2007.  Cariou received no compensation for these works, and both Prince and gallery representatives testified in court that they had not requested permission to reuse the photographs.

Similar article :  Copyrights and Copy Wrongs: Learning from the Legal Precedents Set by Jeff Koons Shepard Fairey, and Others