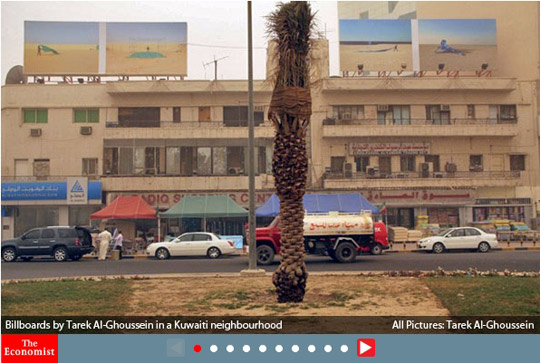 ABOVE a busy roundabout in Hawalli, a suburb of Kuwait, loom four giant but subtle photographs about Arab identity and placelessness by Tarek Al-Ghoussein. A Palestinian photographer originally from Kuwait, Mr Al-Ghoussein has exhibited widely, but this is the first time his work has been seen in the country of his birth.


Mr Al-Ghoussein is best known for a series of self-portraits that are too politically sensitive to be shown on billboards in a conservative sovereign state like Kuwait. In these works, the artist wears the ideologically loaded black-checkered “kufiya” scarf while walking through different environments, such as airports, shipyards, ruined buildings and shooting ranges…