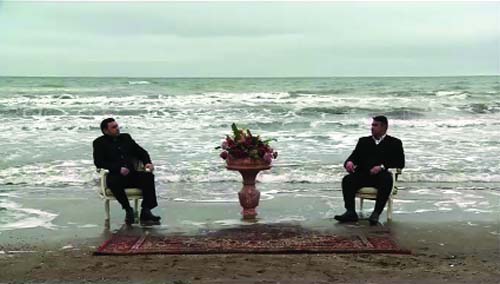 Ignoring the rising tide of revolution: detail from a still of "Ride the Caspian", a video by Almagul Menlibayeva and Bahar Behbahani

Artists are more sensitive to the Zeitgeist than the rest of us, we are told, but in the case of the 10th Sharjah Biennial (until 16 May), the curators have also been remarkably farsighted. They were bashful, however, about drawing attention to it at the press conference. When asked whether any of the works were about the revolution that has been taking place across the Arab world since January, they said, not really, because everything had been chosen or commissioned a year ago.
And yet the key words that curators Suzanne Cotter (English, of the Guggenheim Abu Dhabi), Rasha Salti (Lebanese, living in New York) and Haig Aivazian (Lebanese, currently based in Chicago) have chosen to guide their biennial include insurrection, affirmation, treason, traducer.

Christie’s Dubai – 19th of April: $8 million
Emaar Properties contribute the evolution of culture and art...
Middle East as hub for Art Collectors: Art is not for the el...