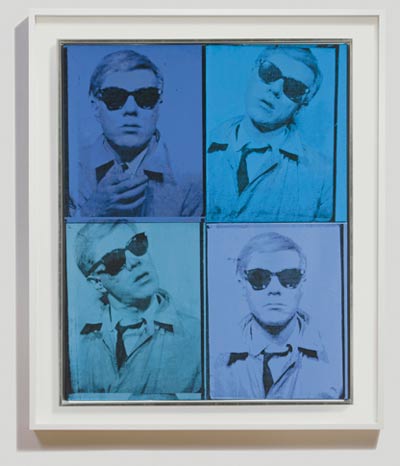 An Andy Warhol self-portrait purchased in 1963 for $1,600 on an installment plan is poised to fetch $30 million or more when it hits the auction block at Christie’s in May.

“Self-Portrait,” a four-panel acrylic silkscreen depicting the pop artist wearing a trench coat and sunglasses, is being sold by the family of Detroit collector Florence Barron.

Barron first commissioned Warhol to paint her portrait, but changed her mind and suggested the young artist depict himself, telling him, “Nobody knows me … They want to see you.”

The result was Warhol’s first self portrait, four images taken in a coin-operated photo booth rendered in hues of blue.

“My mother didn’t look at collecting in terms of ‘is this important or not important,'” Guy Barron told Reuters.

“She looked at it from the standpoint of what resonated with her, and of ‘I want to live with it.’ It was not done as some people do today, as wall power.”

The portrait graced the living room wall of the family home in Detroit. It also went on public display, serving as the cover image for catalogs from major Warhol exhibitions and retrospectives at the Museum of Modern Art in New York and the Guggenheim in Bilbao, Spain.

Brett Gorvy, Christie’s international co-head and deputy chairman for post-war and contemporary art, said the work marked the beginning of Warhol’s own stardom.

“With dark sunglasses an oblivious gaze, Warhol was ahead of his time in creating a new archetype of glamour,” Gorvy said.

“The painting is remarkable not only for its visual impact and the introduction of the photo booth genre, but for marking a key moment in the history of art, when Warhol takes his place in the pantheon of celebrity alongside Marilyn, Elizabeth and Elvis.”

Barron, whose family includes two married sons and several grandchildren, said they were auctioning the work because “dividing is not possible, so selling makes the most sense.”

“I feel that Andy Warhol himself would appreciate this, because he always talked about everyone in their lifetime having their turn in the spotlight for 15 minutes. Who’d have thought that his self-portrait would play such a role in our lives?”

The record for a Warhol self-portrait is $32.6 million set last May at Sotheby’s in New York. The record price for any Warhol sold at auction is “Green Car Crash (Green Burning Car I),” which Christie’s sold for a whopping $71.7 million in 2007.