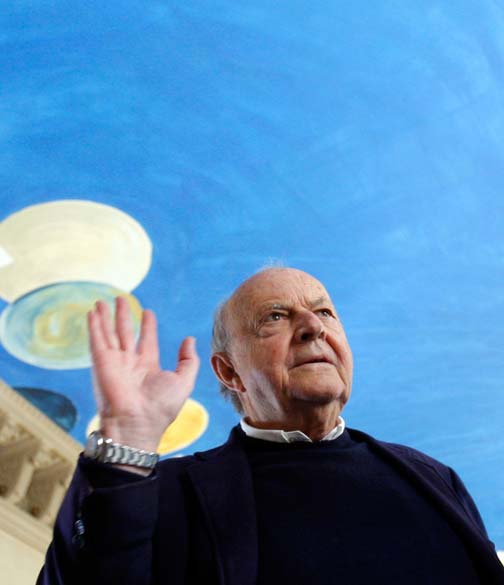 One of the greatest American artists of 20th century Cy Twombly, famous for his paintings featuring scribbles, graffiti and unusual materials, died Tuesday, 5th of July. He was 83.

Twombly, who had cancer, died in Rome, said Eric Mezil, director of the Lambert Collection in Avignon, France, where the artist opened a show in June. Twombly had mostly lived in Italy since 1959.

“A great American painter who deeply loved old Europe has just left us,” French Culture Minister Frederic Mitterrand said in a statement. “His work was deeply marked by his passion for Greek and Roman antiquity, and its mythology, which for him was a source of bottomless inspiration.”

Twombly was known for his abstract works combining painting and drawing techniques, repetitive lines and the use of words and graffiti. He is often linked to the legendary American artists Jasper Johns and Robert Rauschenberg.
In 2010, he painted a ceiling of the Louvre museum in Paris, the first artist given the honor since Georges Braque in the 1950s.
The Lexington, Virginia-born artist said he was inspired by the colors he found in a Chinese print as well the blue of early Italian Renaissance artist Giotto, who used paint made from lapis lazuli.