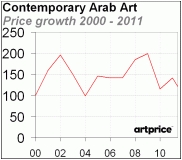 On the back of strong growth in the Contemporary art segment (which saw its global annual auction revenue multiplied by ten over the last decade) Contemporary Arab artists became a growing source of income for auction houses after 2005-2006. Before that, to maximise their earnings, the majority focused their attention on artists born between 1920 and 1944 (In 2006, 73% of auction revenue from Middle-Eastern art was generated by artists born between 1920 &1944).

In the following three years, the Middle Eastern market saw a substantial increase in revenue from Contemporary art with young signatures accounting for more than 20% of the market in 2008 versus an average of 7% in 2006.
By the middle of 2008, the Contemporary art market reached its peak and the subsequent meltdown was particularly harsh in the Middle East. In the second semester of 2008, half of the works offered for sale were bought in; then the price index fell 42% in 2009 alone. In the first half of 2011, the market re-stabilised with prices returning to approximately the levels recorded at end-2004 (i.e. before the market started its frenetic acceleration)

Nowadays, Contemporary Arab artists are receiving unprecedented exposure in the Middle East from a wide variety of organisations and auction houses. This includes specialist sales at Compagnie Marocaine des Œuvres & Objets d’Art de Casablanca, Beyaz Pazarlama ve Muzayedecilik and Antik AS in Istanbul, Christie’s Dubai since 2006, Bonham’s Dubai since 2008, and Sotheby’s Doha since 2009. There is also tremendous Contemporary artistic energy focused on art fairs in Marrakech and Dubai, alliances between Qatar and Europe (creation of a curators prize between Qatar and Italy), events organised by Edge of Arabia and much enthusiasm for the major cultural works being carried out on the island of Saadiyat in Abu Dhabi (a “Louvre” designed by Jean NOUVEL, a “Guggenheim” by Frank Owen GEHRY, an Art & Design centre by Zaha HADID, and… a maritime museum conceived by Tadao ANDO).

Outside the region’s “frontiers”, the appetite for Contemporary Arab art is stimulated by a strong presence at major cultural meetings such as the exhibition The Future of a promise in Venice, produced by Edge of Arabia, (The Future of a Promise, organised alongside the 54th Venice Biennial. The exhibition brings together artists from the Lebanon, Egypt, Syria, Algeria, Saudi Arabia, Tunisia, Morocco, Palestine, Jordan and Iraq) and by the development of specialised acquisition committees at major art museums like the Tate Modern, the British Museum and the Guggenheim, as well as by other major events such as the exhibition dedicated to Turkish art at Saatchi in 2011: Confessions of Dangerous Minds, Contemporary art from Turkey.
The current dynamism of the Middle East art market is allowing the younger and most in-vogue artists to beat the records set by the older generation: for example, Message/Messenger by the young Abdulnasser GHAREM (born in 1973) fetched ten times its estimate in April 2011 at Christie’s Dubai selling for $700,000, while the top auction score of a globally known like artist Shirin NESHAT (born in 1957), whose works already sold in London and New York in 2000, is just $220,000… one third of Abdulnasser Gharem’s record.