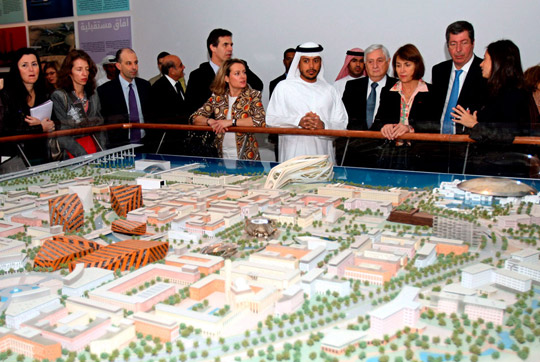 File photo of French Culture Minister Christine Albanel (3-R) receives a brief about a model for Louvre museum at Emirates Palace in Abu Dhabi, United Arab Emirates, 07 January 2007. Abu Dhabi signed a deal with France to build a spinoff of its most famous museum, the Louvre, in the Gulf emirate better known for oil than art. Abu Dhabi will pay 400 million euros to use the prestigious Louvre name for 30 years as part of a cultural accord that will see paintings from the home of the Mona Lisa exhibited in the museum to be built on a luxury resort island. EPA/ALI HAIDER.

The Abu Dhabi developer building a vast cultural district in the Emirati capital said Monday a branch of the famed Louvre museum will open there in late 2013, despite questions about the timetable for another part of the project.

The Tourism Development and Investment Co. told The Associated Press that a branch of the Parisian art institution will be the first museum to open in the Saadiyat Island cultural district, a year behind schedule. Plans originally called for a 2012 opening date.

TDIC’s comments came a day after the state-run developer disclosed it had dropped a tender seeking bids for major construction work on a branch of the Guggenheim Museum, raising questions about that project’s future.

The developer insisted that all projects on the island will be completed, however.

“TDIC continuously monitors the delivery of its projects to ensure they remain on schedule, within budget and that TDIC’s high standards are upheld throughout the process. TDIC is moving forward as planned with all of its announced projects including all the projects on Saadiyat,” the company said in response to questions from the AP.

TDIC said work on the Louvre is “progressing as planned,” with initial ground preparation and design work already complete.

Officials at the Louvre in Paris referred questions about the project to the Agence France-Museums, or the French Museums Agency, which was set up to coordinate to coordinate France’s involvement with the project. No one there could be reached for comment.

On Sunday, TDIC confirmed that it had temporarily dropped plans to award a major construction contract for concrete work on the Guggenheim. It linked the decision to a review of its strategy for handing out jobs to contractors. It didn’t say when it would again seek bids.

The Guggenheim in New York downplayed the move.

“This is a decision by TDIC relating to construction and does not affect the ongoing planning for the Guggenheim Abu Dhabi Museum,” Deputy Director Eleanor Goldhar said by email Monday.

The Guggenheim and the Louvre branches are the highest profile attractions planned for Saadiyat Island. The area slated for the cultural district, now just a wind-swept desert construction site, is just a short drive from the downtown skyscrapers rapidly being built along Abu Dhabi’s Persian Gulf waterfront.

TDIC is one of several companies set up by Abu Dhabi to diversify the economy and drive development in the emirate, which borders Dubai to the south. The money-losing company relies heavily on direct cash infusions from the oil-rich Abu Dhabi government, but has also turned to banks to fund some of its operations.