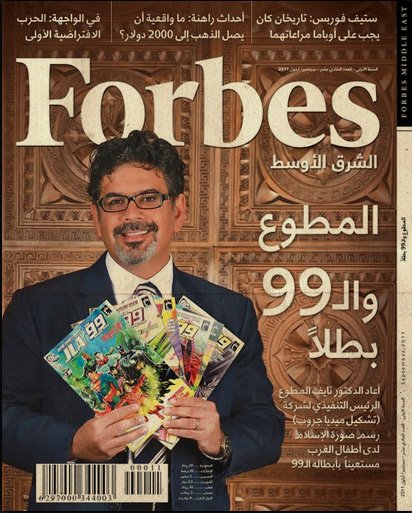 He is not an artist in the direct meaning of this word, but his idea is revolutionary and extraordinary  artistic. Creator of the Islamic Comic Book 99 – Naif Al Mutawa,  at the present moment  is a most famous  Kuwaiti creator of visual arts  in the world. Mentioned by President Obama in his speech ( see video below) and now on the cover of FORBES – Middle East.

Naif Al-Mutawa  Kuwaiti psychologist and dad of five sons, has personally tasked himself with constructing a kids’ entertainment franchise that can compete in a global market—with the plainly stated mission of secularizing Islamic art and culture in order to save it.- Article