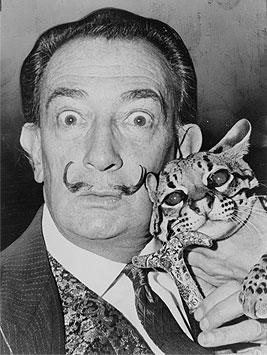 It looks like an easy question, but hide a serious dilemma. If you have a friend and he is an artist, it was probably happened to you to listen some unpleasant comments about other artists.

Those comments always justified in some kind as …if he is an artist he always knows better all art matters then somebody who is not an artist.

There is a small part of truth in it, since artist studied art in the academy ( studied well)  just in few seconds he can understand the mistakes and strong points of an artwork such as a sculpture or painting, that untrained eye cannot see, but sure this quality doesn’t make him a professional art critic as well we live in postmodernism  and many other criteria  give a value to an artwork.

However history recorded so many facts about jealousy and competition between the artists. Often eccentric and egocentric part of artist’s nature sometimes make them fierce rivals to their very closed friends-colleagues.

Flavorwire has collected the most harshest insults of all the times artists-on artists:

Titian on Tintoretto:
“He will never be anything but a dauber.”

William Blake on Peter Paul Rubens:
“To my eye Ruben’s coloring is most contemptible. His shadows are of a filthy brown somewhat the color of excrement.”

Pierre-Auguste Renoir on Leonardo da Vinci:
“He bores me. He ought to have stuck to his flying machines.”

Marc Chagall on Pablo Picasso:
“What a genius, that Picasso… It’s a pity he doesn’t paint.”

Frida Kahlo on the European Surrealists:
“They are so damn ‘intellectual’ and rotten that I can’t stand them anymore… I’d rather sit on the floor in the market of Toluca and sell tortillas, than have anything to do with those ‘artistic’ bitches of Paris.”

Salvador Dalí on Piet Mondrian:
“Completely idiotic critics have for several years used the name of Piet Mondrian as though he represented the sum mum of all spiritual activity. They quote him in every connection. Piet for architecture, Piet for poetry, Piet for mysticism, Piet for philosophy, Piet’s whites, Piet’s yellows, Piet, Piet, Piet… Well, I Salvador, will tell you this, that Piet with one ‘i’ less would have been nothing but pet, which is the French word for fart.”

William Powhida on Takashi Murakami:
“…that hack Murakami trying to consume the market whole and ended up designing handbags…”