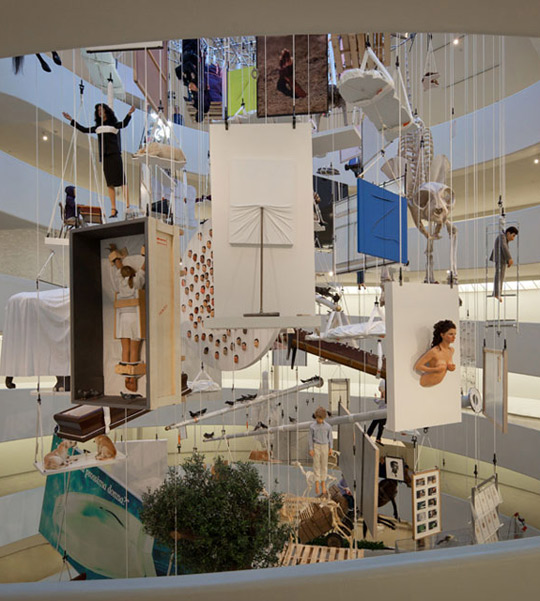 The exhibition Maurizio Cattelan: All is the first retrospective of the internationally acclaimed artist’s work. Hailed simultaneously as a provocateur, prankster, and tragic poet of our times, Maurizio Cattelan (b. 1960, Padua, Italy) has created some of the most unforgettable images in recent contemporary art. Maurizio Cattelan: All brings together some 130 works—examples of virtually everything the artist has produced since 1989—and presents them en masse, strung seemingly haphazardly from the oculus of the museum’s rotunda in a site-specific installation.

For the first time, the Solomon R. Guggenheim Museum has produced a mobile app to accompany an exhibition. The app Maurizio Cattelan: All accompanies the major exhibition of the same name, on view at the Guggenheim from November 4, 2011, to January 22, 2012.

A key feature of the Maurizio Cattelan: All app is an interactive interface using detailed shots of the exhibition model that allows users to zoom in on the installation from four different perspectives, scrolling through and examining works in closer detail. By tapping on individual artworks, users can read in-depth commentary as well as listen to audio of Cattelan’s reflections on his works read by Waters.

Exclusive footage of Cattelan’s works being installed in the museum’s rotunda is also included, as well as conversations with the Guggenheim conservators and technicians who created the armatures for the artworks and oversaw the installation process. Other contributors include critic Vince Aletti; artist Carsten Höller; curators Francesco Bonami, Germano Celant, Bice Curiger, Massimiliano Gioni, and Chrissie Iles; and gallerists Marian Goodman, Massimo De Carlo, and Emmanuel Perrotin.

As a bonus feature, the app contains selections from issues of Cattelan’s new magazine, Toilet Paper, plus a preview of its latest edition, which was created on the occasion of the retrospective. The magazine’s highly constructed images and videos, which appear sans text, delve into sublimated perversions and unconscious desires, hopscotching genres as wide-ranging as spirit photography, fashion shoots, Japanese horror films, and corporate annual reports.

The app is available on iPhone, iPad, and Android, $3.99 for phone and $5.99 for tablet, at guggenheim.org/cattelan-app. During the first week of the exhibition, November 4–11, 2011, the app is available for a special discounted price—$1.99 phone and $3.99 tablet. With museum admission, visitors may use the app on tablets at stations in two locations.