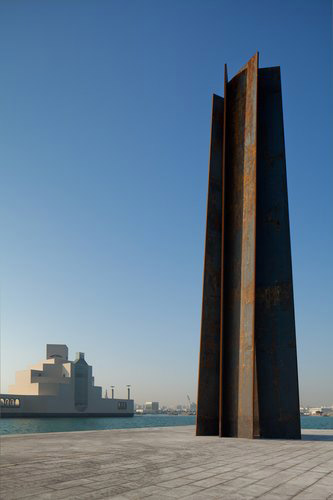 Seven slabs of German-made steel have become Qatar’s latest statement of cultural ambition. Richard Serra’s sculpture “7,” the artist’s first public commission in the Middle East and the tallest of his vertical works, stands as a sobering presence at the edge of a new park between the I.M. Pei-designed Museum of Islamic Art and, across Doha Bay

The 26-meter-, or 88-foot-, high sculpture is seen as representing “a beacon for the arts in Qatar,” said Sheika Al Mayassa bint Hamad bin Khalifa Al Thani, the 28-year-old daughter of the emir of Qatar, the head of the Qatar Museums Authority and a relentlessly hands-on force at the helm of Doha’s art scene.

At the unveiling in December, Mr. Serra made reference to that drive when he said his large-scale sculptures could “only be built where there is faith and values to support the enormous efforts of such an undertaking.”

In recent years, art has become an international attention-grabber for Qatar, to the point where the rapid building of museums, invitations to big-name artists and purchases of major Western artworks have, some in the art world say, overshadowed the sovereign state’s grassroots intention: to explore its cultural heritage, nomadic history and develop deeper bonds with the Middle East and beyond.

Doha, Dubai and Sharjah – which one is the true art ca...
The art scene in Qatar “is an empty golden shell” ?!
The Most Expensive Painting Ever $250m Bought by Qatari Roya...