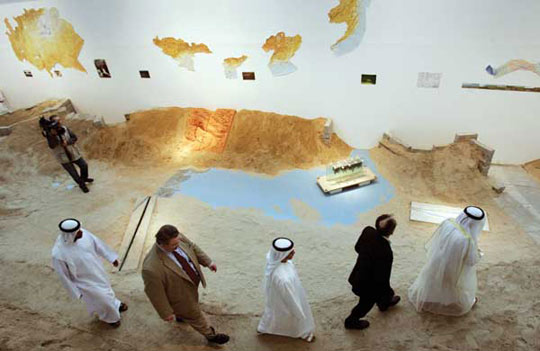 Visitors to the 2007 Sharjah Biennial. The emirate has been building a reputation for culture for the past 20 years

The noise may all be about the art scenes of Doha and Dubai, but the solid creativity is in Sharjah.

Glitz and six-inch heels at the Dubai art fairs last month; high-cost international art in Doha with the Takashi Murakami show, previously in Versailles, where it was paid for by Qatar’s ruling family. The noise in the western media has been about these places because that is where there is money, there is buzz, and for many, art is all about money.

But there is another, quieter emirate, where art is still about art, where there is an evolved museum scene, where you can see theatre and hear cross-over music such as Tarek Atoui’s “Revisiting Tarab”, heard last month in one of the old city’s squares.

It is Sharjah, the emirate in the UAE that westerners can rarely quite place (it is just north of Dubai, as close as Wimbledon to Piccadilly). With income from a little gas and a free port, it is not rich compared to Abu Dhabi or Qatar, yet it has invested for over 20 years in its museums, in its biennial and the March Meeting, now in its fifth edition, when it invites a range of international artists, curators and policy makers, not to mention journalists, to do some cross-fertilising talking.

If Qatar is known for its foreign policy ambitions and Al Jazeera, Abu Dhabi as the seat of the UAE’s central government, Dubai as the hub for finance, commerce and tourism, Sharjah is the emirate where intelligence and education are valued most highly. The emir, Sultan bin Mohammed Al Qasimi, gained PhDs in history and geography at Exeter and Durham universities, and takes the lead. His daughter, Sheikha Hoor, a fluent Japanese speaker and graduate of the Slade and Royal Academy Schools has a gentle manner but a resolute character, which led her, when only 22, to turn the 2003 Sharjah Biennial from a show where the efforts of ambassadors’ wives were exhibited into an international event, fully in touch with the contemporary avant-garde.

Abdul Rahman Al Owais, the minister of culture of the UAE, admitted to The Art Newspaper that he had opposed the change, but says that the biennial is now one of the outstanding events of the UAE. Actually, it is one of the outstanding events of the whole Middle East, easily the equal of the Istanbul Biennial, and an indispensable insight into the ideas circulating in the region and beyond. “A lot of artists here use art as an outlet for political dialogue, as the best way of getting their point across. Sometimes it works and sometimes it doesn’t,” says Sheikha Hoor.

The theme of this year’s March Meeting was artists’ residencies—the embedding of artists in communities for mutual benefit—and the commissioning process. The speakers ranged from the US to Korea, from the director of the Grizedale Sculpture Park in England’s Lake District to the cultural adviser to Tokyo city.

Delicate topics were touched upon at the meeting and with a sense of common purpose, but one young Emirati man in national dress, a rarity in the audience, asked the key question: “Why are the museums empty?” Yet, while this is certainly true of Qatar, with its beautiful but echoing Museum of Islamic Art and its Mathaf: Arab Museum of Modern Art, it is much less so for Sharjah, where strenuous efforts are made by its museums, which are in the historic centre, to involve the people.

“Our audience is everyone, we translate some of our material into Urdu and Tagalog,” says Sheikha Hoor, referring to the Pakistani and Filipino workers, who in other emirates get ignored in any cultural programming, much to the indignation of western critics. “We encourage the artists in our residencies to work with the universities and schools. We collaborate with the Sharjah City for Humanitarian Services, which is for the disabled, especially the autistic. Of course we are for the elite, but also for people attracted by our music performances, for example. And I do not want to monopolise the scene with contemporary art; we also have the Calligraphy Festival, which attracts people from far afield. You can’t expect everyone to like what we are proposing.”