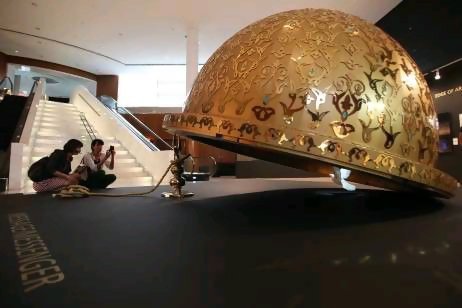 At Christie’s Middle East, which is based in Dubai, 38 per cent of the works of art sold through the auction house last year topped their highest pre-sale estimates, while 85 world auction records were set as interest in contemporary Middle Eastern art continued to grow.

“We had probably one of the best years for Christie’s, because we’re seeing not only investors coming into the market but collectors investing more into their collection,” said Isabelle de la Bruyère, the director of Christie’s Middle East.

“The market is healthy and good for buyers, because they can see this is a market that is sustainable and attracting more and more interest,” said Ms de la Bruyère.

More collectors from Pakistan are basing themselves in the Emirates, as are buyers from South Asia, said Antonia Carver, the fair director for Art Dubai, a festival featuring 75 galleries that begins on Wednesday at the Madinat Jumeirah hotel.

Next month in Dubai, Christie’s plans to hold a sale of modern and contemporary Arab, Iranian and Turkish art.

“We realise our auctions are intimidating and people do have a tendency to think you need to be a millionaire to come to Christie’s,” said Ms de la Bruyère. “But that is not actually the case. Art is not for the elite. Art is for absolutely everybody.”

Read more: The National – Portrait of Middle East as hub for collectors