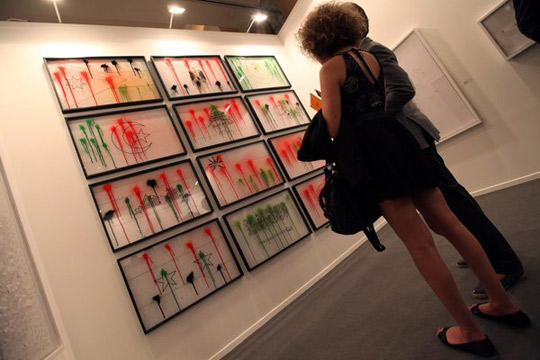 The Emirati artist Abdul Qader Al-Rais, 60, looked pleased last week as he showed off his latest works in the Hunar Gallery booth on the first public day of Art Dubai, the annual art fair for the region’s contemporary art community.

Mild-mannered and soft-spoken, Mr. Rais gestured to his untitled oils: “These are inspired by the Arab Spring,” he said, in halting English to a couple from Japan.

One of his works featured a silhouette of President Bashar al-Assad of Syria against a backdrop of red, with the words “Death Over Humiliation” written in Arabic. “It’s a painting of Bashar al-Assad killing his people,” he said.

The painting sold at the fair for $30,000 to an Emirati collector.

Other works that sold on the same day included the Moroccan artist Zakaria Ramhani’s politically inspired acrylic “Faces of You Other” for $24,400 and the Egyptian artist Mohammed Taman’s “Qaddafi’s Bullets” for $16,000.

For Mr. Rais, who is considered one of the Emirates’ pioneering artists, the local and regional art movement has come a long way. He believes it has been accelerated primarily by the cultural momentum gained as a result of high-profile museums and events such as Art Dubai, which featured more than 70 international galleries in its 2012 edition that concluded last week.

Art Dubai has become a key one-stop shop for international dealers and collectors. But it is not just about selling art. The fair has been integral to promoting regional discussion and exchange about art. A key figure in promoting such links has been Antonia Carver, the fair director, who has lived in Dubai since 2002.

Emaar Properties contribute the evolution of culture and art...
Middle East as hub for Art Collectors: Art is not for the el...
Doha, Dubai and Sharjah – which one is the true art ca...