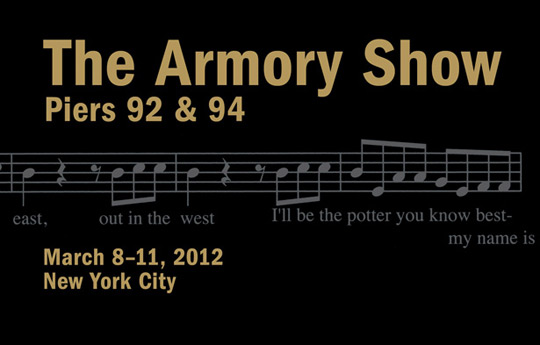 The outstanding exhibitor list is a testament to the exciting changes the fair has undertaken this year including a re-designed floor plan by the award-winning, New York City-based, architectural firm Bade Stageberg Cox and an enhanced programmatic schedule.

The inaugural edition of Armory Performance will debut in 2012 featuring artists active in the Nordic Region and in the United States. Armory Performance is curated in part by Malmö Konsthall director Jacob Fabricius and will feature: Kreppa: A Symphonic Poem about the Financial Situation in Iceland (by Örn Alexander Ámundason, performed by Metropolis Ensemble and directed by Andrew Cyr, Artistic Director/Conductor) whose performance will question what a financial collapse sounds like; Amorphous Assemblage (composed by Lilibeth Cuenca Rasmussen) which will take place throughout the fair floor as living sculptures emerge from white cocoons; OSLOO—A COLLECTION OF CENTERS—In New York (by: FOS), where the artist, for two hours and accompanied by many, will host a programmed public event under the theme “public spiritualism”; and Armory Artist Theaster Gates will Hold Court for three days on the Armory Show floor in his SEE, SIT, SUP, SIP, SING: Holding Court. Not quite a performance, Holding Court will give us all time to reflect on the artist’s engaging body of work, offering a derive to this year’s fair. For a complete program, please click here.

For the third edition of Armory Focus, The Armory Show has turned its attention to the dynamic arts community of the Nordic countries and will feature 19 of the most exciting galleries from Denmark, Norway, Sweden, Finland and Iceland. This invitation-only component of The Armory Show, Armory Focus: The Nordic Countries is curated by the esteemed Malmö Konsthall director, Jacob Fabricius who has carefully crafted Armory Focus to include works by leading artists, an engaging schedule of performances, FREE STUFF and more. The work being produced in the Nordic region today includes some of the most engaging and dynamic practices and projects in the contemporary art world – artists such as Olafur Eliasson, Ragnar Kjartansson, FOS, Karl Holmqvist and Goldin + Senneby, will be featured prominently in Armory Focus, taking place on Pier 94 in the Nordic Lounge.