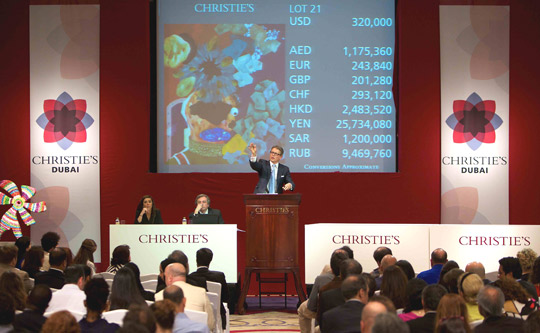 Part I – The highlight was Mahmoud Saïd’s Marsa Matrouh which sold for $602,500, double its estimate. In addition, a work by international contemporary artist, the Iraqi Ahmed Alsoudani, sold for $386,500. The last lot in the sale was a work created just yesterday in front of an audience by the Tunisian artist Nja Mahdaoui and four young Emiratis. It sold for $50,000 to benefit the Noor Dubai Foundation and under the patronage of H.E. The Minister of Culture, Youth and Community Development.

Michael Jeha, Managing Director of Christie’s Middle East and Head of Sale, said: “We are delighted with the sale this evening which had such a strong sold percentage and in which 4 new world auction records were set. With such an impressive group of artists represented in the part I sale combined with the emerging talent in part II, collectors have had a rare chance to see the past, present and future talent among the artists of the Middle East and Turkey. We look forward to the part II sale tomorrow evening.”

After the success of the Edge of Arabia sale held this time last year in Dubai and Christie’s support for the group’s recent exhibition in Jeddah, the audience applauded when Abdulnasser Gharem’s (b. 1973) In Transit V sold for $116,500, the second highest price for the artist at auction.

A portrait by the celebrated Turkish artist Azade Köker, (b.1949), entitled And it was my life that was flowing slowly… sold for $86,500 and a glamorous painting of Marilyn Monroe by Murat Pulat set a new record for the artist when it fetched $56,250.

Part II –  The highlight of the auction was the $46,300 raised during the sale of seven lots for the World Food Programme.

Michael Jeha, Managing Director of Christie’s Middle East and Head of Sale, said: “The combined total for this, our 12th season in the Middle East, is an encouraging indication of the continuing maturity and long term strength within this market. Tonight the saleroom was full and bidding was brisk. Much of this participation in the sale came from bidders in the room and this contributed to the lively atmosphere from collectors of all ages. Our part II sale is still in its infancy, this is only the second time we have used this format which is followed in Christie’s other international sale centres. The strong selling rate tonight of 93% shows that this was the right decision and the market is ready for this next step. It is really encouraging to see this market continue to flourish and to encourage the next generation of artists and bidders. About a fifth of the artists represented in the part II sale tonight were being sold at auction for the first time and were under 35.”