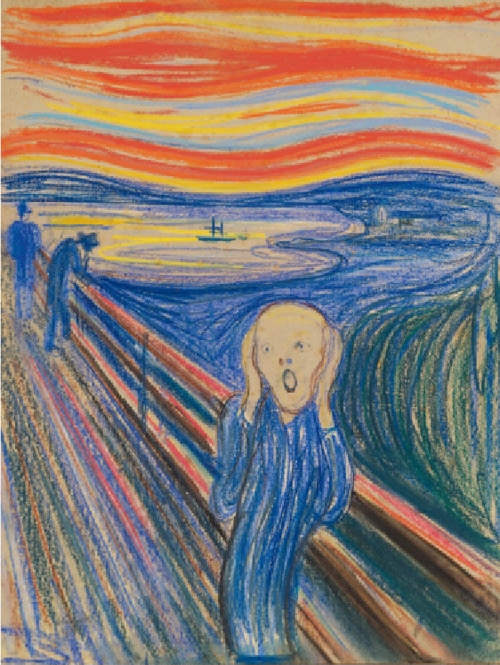 “The Scream” “the second most famous work of art in the world, after the ‘Mona Lisa'” – Simon Shaw, head of Impressionist and Modern Art of Sotheby’s in New York.  The work is one of four versions of the same subject created by Norwegian artist Edvard Munch (1863 – 1944) –  the only one still in private hands. The masterpiece will go under the hammer on May 2, 2012,  where it is expected to fetch more than $80 million.

The picture — a vivid pastel, produced in 1895 — is owned by Petter Olsen, a member of the Olsen shipping dynasty. His father Thomas was a friend and neighbor of Munch, and amassed a large collection of the artist’s work.

Olsen is selling “The Scream” to fund the construction of a museum and arts center, Ramme Gaard, at Hvitsten, Norway, in which he plans to display the rest of his paintings. The new venue is set to open next year, the 150th anniversary of Munch’s birth.

Copies of the painting have appeared on everything from postcards and umbrellas to mousemats. The image inspired Wes Craven‘s “Scream” film franchise, and was referenced in posters for the “Home Alone” movies, starring Macaulay Culkin.

“It has a double life,” Shaw told CNN. “It is a key image in the history of modern art, but on the other hand, it has also become a cornerstone of popular culture: We all know it from the films and the cartoons, the parodies, the pastiches and the toys.
Everybody knows ‘The Scream’ — it is one of the most recognizable paintings anywhere — but relatively few people have seen the original. What we know are the parodies.” Simon Shaw, Sotheby’s 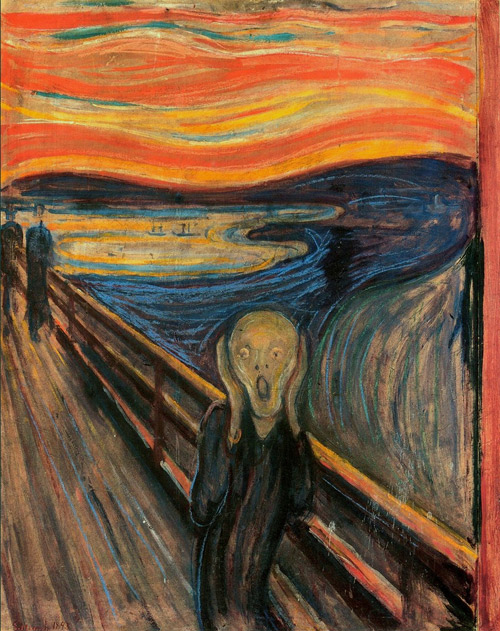 “The opportunity for a museum or a private collector to buy one of the great icons of art history is unlikely to be repeated any time soon,” said Shaw. “We know there is a lot of demand, and very little supply. It has truly global appeal, and could go anywhere.”

Insiders expect that the Persian Gulf state of Qatar, nominated by The Art Newspaper as the biggest art buyer in the world, famous for recent acquisitionof Cézanne’s The Card players (the most expensive painting ever)  and Rothko and Hirst, will be aiming to add Munch to that list. Flush with oil and gas, Qatar has the world’s highest per capita income, so the world’s second most famous painting—after the Mona Lisa—could yet become its most expensive.

“If you are a rich country, why wouldn’t you create important cultural institutions?” asks Jean-Paul Engelen. Engelen is an auction-house veteran who recently took charge of the QMA’s exhibitions and public projects. He says that the royal family—especially the emir Sheik Hamad bin Khalifa al-Thani and his 29-year-old daughter, Sheikha Mayassa, who heads the QMA—sees art as “an important part of educating the people of Qatar.”

The Scream (Norwegian: Skrik) is a series of Expressionist paintings and prints created by Norwegian artist Edvard Munch between 1893 and 1910, showing an agonized figure against a red sky. The landscape in the background is the Oslofjord, viewed from Ekeberg, Oslo.

Edvard Munch created several versions of The Scream in various media. The National Gallery, Oslo holds one of two painted versions (1893, shown to right). Experts estimate that the painting could sell for as much as $80 million. Munch also created a lithograph of the image in 1895.

In a page in his diary headed Nice 22.01.1892, Munch described his inspiration for the image thus:

I was walking along a path with two friends – the sun was setting – suddenly the sky turned blood red – I paused, feeling exhausted, and leaned on the fence – there was blood and tongues of fire above the blue-black fjord and the city – my friends walked on, and I stood there trembling with anxiety – and I sensed an infinite scream passing through nature.