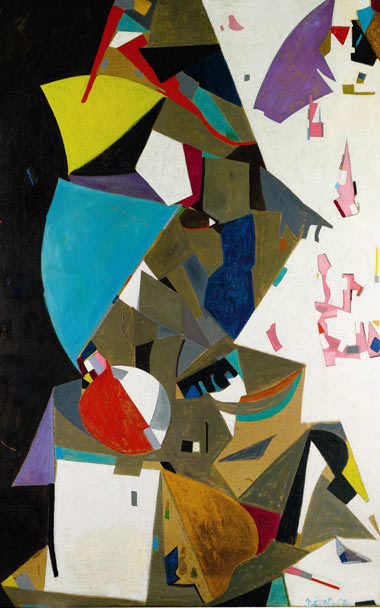 Sotheby’s London announce that its sale of Contemporary Turkish Art, will take place on Thursday 26th April 2012 during Sotheby’s Turkish and Islamic Week: Classical to Contemporary, which will commence on the 24th of April 2012*. Comprised of over 90 lots, the sale is estimated to fetch in excess of £1.5 million.

The auction will be led by Abstract Composition (estimated at £250,000-350,000**), an exceptionally rare work by the École de Paris master, Nejad Melih Devrim, one of the most important Turkish artists of the 21st century.

Commenting on the sale, Elif Bayoglu, Sotheby’s Deputy Director and Head of Sale, Contemporary Turkish Art, said: “We are thrilled to be holding our fourth sale in this collecting category. Over the past three years we have witnessed tremendous growth in the number of international clients active in this field. We look forward to growing this market even further with this year’s auction, which is set to provide some extremely exciting collecting opportunities to collectors.”

Commenting on the Nejad Melih Devrim work, she continued: “Abstract Composition is among the most important of Nejad Melih Devrim’s paintings to appear on the market in recent years. With its distinguished provenance, rare monumental size and its beautiful composition, it is a work of museum quality and a collector’s item at its best.”

It is now offered at auction for the first time since it was painted in 1952. After remaining in the artist’s personal collection for 35 years, it was acquired by a prominent collector in 1987 and has remained in the same collection ever since. The present painting is among the largest works the artist ever made. It belongs to his most revered 1950s period, and is true testament to Nejad’s mastery in creating the most arresting compositions with geometric abstraction.

Although clearly passionate about Paris, Nejad never forgot his cultural roots and infatuation with the Byzantine mosaics he studied at the Chora Museum in Istanbul. After he moved to Europe, he studied the stained glass windows in Chartres Cathedral, France and the Byzantine mosaics in Ravenna, Italy throughout his extensive travels. The light emanating from these mosaics and the stained glasses and the fascination they evoked on the viewer were what drew him in and Nejad perhaps thought the best way to recreate this light in painting was through the use of vibrant colours. The varied tones of his paintings recall a surface of fractured light, luminous with colour. His knowledge of Islamic calligraphy and Iznik tiles are rendered within his paintings through expressive curvilinear forms and compositions.

Nejad was among the first Turkish painters to have a solo show of abstract art in Paris, in March of 1947, and was subsequently included in prestigious École de Paris exhibitions curated by Charles Estienne. Nejad Melih Devrim became friends with Marcel Duchamp, Gertrude Stein and Alice B. Toklas soon after he moved to Paris. Stein frequently invited him to the‘salons’ she had organised at her flat.

Later on, in 1950, he was chosen to be one of the 29 artists to be exhibited alongside Jean Dubuffet, Roberto Matta, Pierre Soulages, Nicolas de Staël and Maria Viera da Silva at the Young Painters in the U.S. and France exhibition at Sydney Janis Gallery in New York which curated by the legendary dealer Leo Castelli . He travelled all around the world, from Central Asia to Britain, Italy to the Middle East, U.S. to the Soviet Union.

Nejad’s paintings can be found in the collections of museums in Europe including Musée d’art Moderne de Paris. Nejad moved to Poland in 1967-68 and died there in 1995. Since his death, his works have been included in numerous exhibitions including a retrospective held at Istanbul Modern Museum where his works were exhibited alongside the works of his mother, another leading École de Paris artist, Fahrelnissa Zeid.

Sotheby’s Turkish and Islamic Week will include the following sales:

**Estimates to not include buyer’s premium