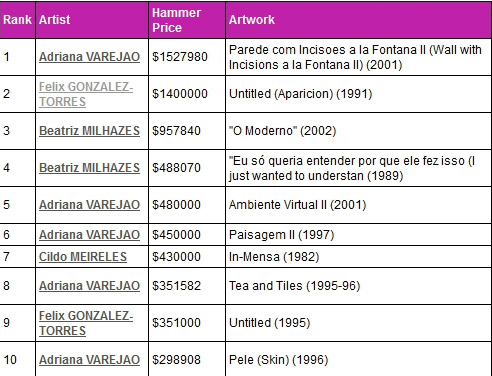 The South American continent is home to a rich emerging scene, increasingly recognized internationally. While numerous collectors, private foundations, museums and artists from the zone have emerged in recent years, it is no coincidence that the major auction houses have organised specialized sales of Latin American art (since 2009 at Phillips de Pury & Company and 2010 at Sotheby’s). The vitality of Contemporary artists in the region, added to the growing global interest of amateur and professional art collectors, has no doubt contributed to the auction records signed in 2011.

Given the abundance and dynamism of artists from the region, which artistic generations prevail, and which countries stand out?
This week’s Top reveals that 3 of the four artists present are from the same generation. Born between 1957 and 1964, these three artists created 9 of the 10 most expensive works by Contemporary Latin American artists in 2011. Brazil, with its extraordinary artistic production and its fast emerging economy, is the big winner in this ranking: of the 4 artists, three are Brazilian and two of these posted new records in 2011: Adriana VAREJAO and Cildo MEIRELES. As for the best result of the Top, it reflects the astonishing rise of Adriana Varejao, who in addition to a first place achieved with a 7-figure result, occupies the 5th, 6th, 8th and 10th places