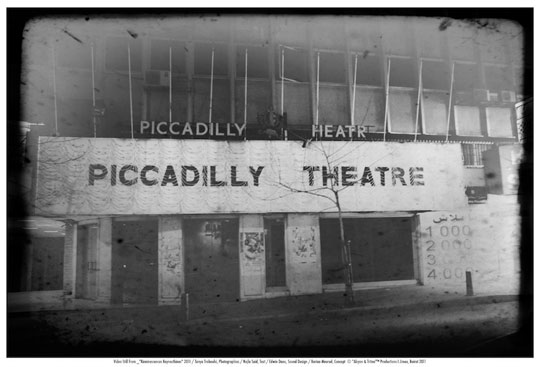 Opening on Wednesday, June 6 at 7pm

with the presence of the curator Bariaa Mourad

Beirut was an exhibition curated by Bariaa Mourad and shown during summer 2011 at Kunsthalle Wein in Vienna – Austria. It was the first issue of an itinerating exhibition cycle dedicated to the Lebanese capital exploring its creative potential as well as featuring various Lebanese artists work and subjects relating to Lebanon’s critical position in the world. Being presented at different international venues, its succeeding show Beirut II will now reach its next stop at the Contemporary Art Platform in Kuwait.

Often referred to as the “Paris of the Middle East”, Beirut has been often thetheater of armed conflicts. From a historical, social and architectursl poin-of-view, the city has became a space filled with tension between divergent interests. Being the first show of its kind in Kuwait, Beirut II will be featuring mainly video, photographic works dealing with issues of freedom, self realization, and social equalities under the aggravated conditions of permanent conflict, as well as sound-installations.

Exhibition will continue until 18th of July, 2012