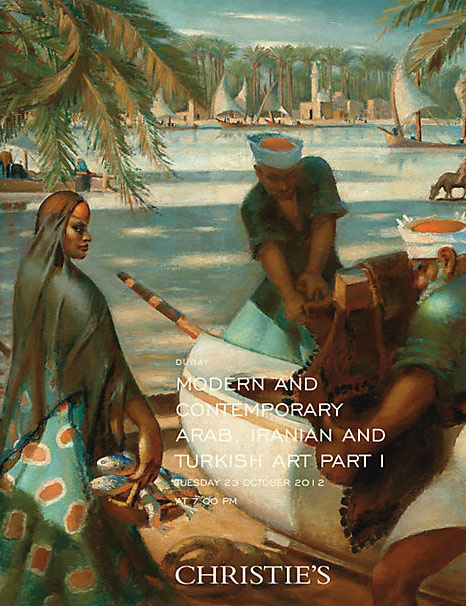 Early highlights consigned for the Modern and Contemporary Arab, Iranian and Turkish Art sale at Christie’s in Dubai on October 23 and 24, 2012 will include works by Paul Guiragossian, Reza Derakshani, Ahmet Elhan and Chafic Abboud. There will also be 6 lots sold to benefit Caspian Arts Foundation, a new educational initiative that supports art students from the region to enable them to study abroad.

Michael Jeha, Managing Director of Christie’s Middle East and specialist in charge of the sale, said: “It is still early days, but the consignments already secured are an encouraging sign for another successful season with a good balance between modern and contemporary works. We will be repeating the new part I and part II formula once more as it has been so well received by our clients and allows us to offer works by younger, contemporary artists whose work can be viewed beside the modern masters and more established contemporary names.”

Among the higher value lots secured so far is Sensibility Green by Reza Derakshani (b. 1952), an oil and enamel work created in 2011 with a spectrum of greens across the canvas (illustrated page 1). An acclaimed painter, a renowned musician and an active performance artist, Reza Derakshani evokes his love of nature, poetry, popular culture and harmony through his works. Born in the Northern region of Iran, Derakshani describes growing up on top of a mountain surrounded by trees and fields of wild flowers, often the inspiration, as here, for his work (estimate: $70,000-90,000).

By the Lebanese master, Paul Guiragossian (1926-1993) is a beautiful composition of yellows and oranges showing a line of figures set against a yellow background which is estimated at $30,000-40,000 (shown above). Also from Lebanon but by a living artist, Camille Zakharia (b. 1962), is a photomontage / photocollage work from 2010 entitled The Fortune Teller (estimate $5,000-7,000 – shown here). Zakharia left Lebanon during the Civil War and his work explores themes of identity, belonging and home. Beneath the central portrait are 72 flipping cards, each carrying a word of wisdom, a proverb or quote.

This piece was first exhibited in the artist’s solo show in Bahrain in 2010 and will be sold without reserve.

From North Africa, is an important work by the Algerian, Abdallah Benanteur (b. 1931) entitled Le Carnaval Venitien, painted in 1973. Depicting a group of costumed characters in Venice using striking purple, pink, blue and yellow hues against a fiery-red background, it is estimated at $60,000-80,000. Abdallah Benanteur was born in Mostaganem, Algeria and brought up in close contact with Algerian music which is reflected in the rich lyrical tone found in his painting. Having settled in Paris in 1953 and been influenced by Paul Cézanne, he made frequent visits to the Musée du Louvre, where he admired the collection of Old Master Paintings. Representing Morocco is a photographic work by Hassan Hajjaj (b. 1961) entitled Eyes on Me from 2000 and set in a walnut wood frame decorated with small glass bottles containing paint in bright colours (illustrated page 1). It shows the face of a woman, her head and face obscured but her penetrating eyes staring straight out. The scarf across the lower part of her face carries the distinctive Louis Vuitton logo, a reference to the artist’s preoccupation with brands and packaging (estimate $10,000-15,000).

A large polyptych Blue Room is from 2011 and the last work to be made by Turkish artist Ahmet Elhan (b. 1959) for the series Places that he has been producing since 2007. Elhan creates the works in this series by combining thousands of photographic frames taken of public spaces such as religious locations, bars, underpasses and schools. It is estimated at $50,000-80,000.

Chafic Abboud (1926-2004) is represented by Le Roi et la Reine de Café, from 1978 showing figures picked out against the thick impasto surface in gentle blues and greys. The Lebanese master’s paintings do not tell the story of an event or adventure, but focus on modest everyday-life snapshots, which the artist enjoyed and wanted to remember. It carries an estimate of $40,000-60,000. 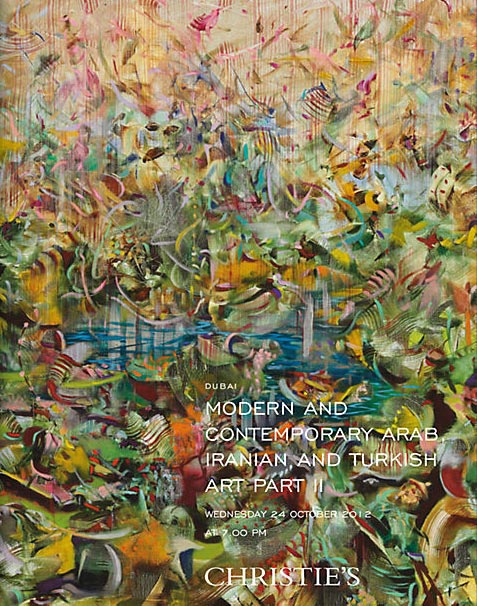 Nina Mahdavi, the Foundation’s founder, said: “Caspian Arts Foundation has the potential to play its part in connecting the East with the West and bridge the gap between culture, language & tradition.”

Dina Nasser-Khadivi, Christie’s Consultant in the Middle East, said: “In order to raise the maximum amount for the charity, these talented artists, some of the world’s leading international contemporary art galleries and Christie’s have all joined together for this sale. We are happy to provide a platform to help launch Caspian Art Foundation and raise funds to enable the next generation of contemporary artists to flourish.”

Caspian Arts Foundation was launched in 2011 as a non-profit organisation, sponsoring young artists and students from the Middle East & North Africa to complete their postgraduate studies in the visual arts at University of the Arts London. The first young artist to benefit from a scholarship will begin his or her studies later this year but, due to the volume of applications and interest from the MENA region, the Foundation wishes to raise funds for 5 additional full scholarships to be awarded in 2013. It is hoped that they can broaden the programme incorporating other disciplines across the arts to include the performing arts and fashion.

The sales on October 23 and 24 are sponsored by Zurich and will be held at the Emirates Towers Hotel in Dubai with pre-sale viewing from the Sunday prior to the sale.

Leila Heller Gallery and JAMM : First Exhibition at The Armo...