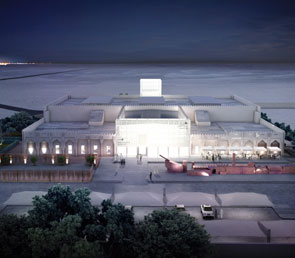 In its forthcoming study of the museum industry over the period 2000 – 2012, Artprice and Organ Museum Research found that more museums and Contemporary art centers were opened worldwide over this period than in the previous 200 years, and they conclude that the period 2012 – 2017 promises to see the opening of even more cultural centres.

As part of this study which focuses on all continents, Artprice has notably observed that for more than 18 months, Qatar has been at the origin of an impressive number of search requests on Artprice databases. In effect, it is now clear that Qatar aims to become the global leader in the international museum industry. The ratio of search requests per head of the Qatari population (1.8 million) is almost 45 times higher than that of Germany for example.

Hence the purchase of Paul Cezanne’s The Card Players for $250 million, which represents the largest transaction ever recorded on the art market. Concerning this acquisition, based on the data requests launched by Qatari cultural authorities, Artprice can confirm 99% that this transaction has taken place.

After analyzing hundreds of thousands of data searches, we can see that the Qatari cultural authorities have a pragmatic but visionary approach. The great strength of Qatar is the Sheikh’s motto “nothing but the best” and “I’m only interested in masterpieces.” What is interesting is that the Qatari authorities are daring in their choice of artists, demonstrating a clear desire to modernize their country. They are generating a worldwide reputation and will undoubtedly be in the global top three if not the number one position in 2013. This hypothesis is being confirmed every day now as a virtual certainty.

However, with Islam as their State religion, the Qataris are preserving their Islamic culture. They also realize that it is necessary to impose a certain pedagogy for Qataris and their general visitors, and, according to our analysis of their data searches on Artprice, this pedagogy includes the undeniable influence of certain artistic movements such as Impressionism and Cubism, and a certain European influence in general.

Read full article: According to an Artprice study, Qatar will soon be the global leader in the museum industry