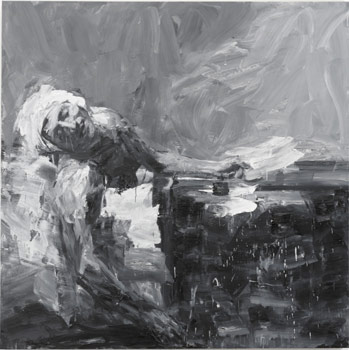 Under the patronage of HE Sheikha Al Mayassa Bint Hamad Al Thani, Qatar Museums Authority is organizing an exhibition by Chinese-French artist Yan Pei-Ming. On view until 12 January, 2013 at the QMA Gallery, Building 10, in Katara, Painting The History will be Yan Pei-Ming’s first major exhibition in Doha, Qatar.

Curated by Francesco Bonami, this exhibition profiles three types of history-makers and highlights the power of painting as a medium for recording historical events and portraying iconic figures. Yan Pei-Ming is a world-renowned artist who became known for his “epic-sized” portraits of Chinese communist leader Mao Zedong and actor Bruce Lee.

Commenting on organizing this exhibition, Jean Paul Engelen, Director of Public Art at Qatar Museums Authority, said: “By using painting Yan Pei-Ming gives a deeper meaning to photographs of famous people and events that have shaped modern history. Equally important is that he makes us think about history, and question how it is written. We are excited to be working with Ming and Francesco Bonami on this groundbreaking exhibition and we invite everyone to come see it when it opens in October.”

The first section of the exhibition is dedicated to the modern history of Arab culture, with more than 100 watercolor portraits of influential figures of the Arab world, from politics to literature and art, including late Egyptian President Gamal Abdel Nasser, Palestinian leader Yasser Arafat, and Lebanese singer Fairuz.

The second section steps into art history, exposing the way it chronicles news. The only work that will be on display in this part of the exhibition will be a triptych of the most famous paintings in Western art—The Death of Marat by Jacques-Louis David, on view now at the Palais de Beaux Arts of Brussels. The original work represents the French revolutionary leader Marat in his bathtub just after he was stabbed to death. David painted this artwork almost concurrent to the event in 1793, working like a reporter or a photographer.

In the last section of the exhibition, Yan Pei-Ming builds on David’s process, painting the history of assassinated political leaders from the beginning of 20th century until recently, including Che Guevera and Mahatma Gandhi. Armed with the ability to document events quickly, photojournalists today have taken the place of artists like David. However, Yan Pei-Ming aims through this exhibition to prove that in an age ruled by digital images, painting can regain its role to allow the public to focus more deeply on history.

Yan Pei-Ming’s Painting the History is accompanied by a bilingual catalogue featuring full-color images of all artworks in this exhibition.