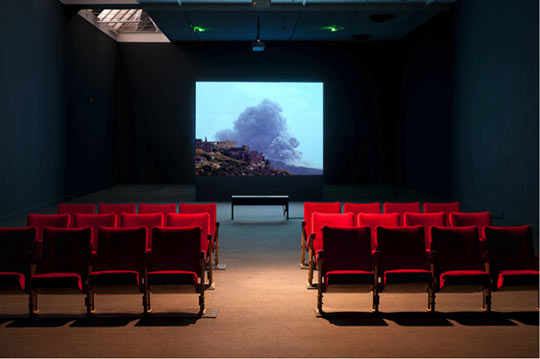 Akram Zaatari (Artist):
“Different subjects, characters and figures that I have dealt with in my work in the past never leave me. They often reappear in my life and find their way to re-emerge in other later works. They totally inhabit my imagination and make me realize they turn my work into a theater of limitless possibilities. It’s a theater where strangers from different worlds find themselves on stage face-to-face.”

Sam Bardaouil and Till Fellrath (Curators):
“The material and physical delineations of a pavilion embody a desire to encapsulate an imagined “essence” within a carefully constructed shell. A pavilion looks like an interruption, where continuities in geography and time all of a sudden break in favor of that finality. When addressing this problem, curating a “national pavilion” can become an act of a revisionist nature, presenting a work that refuses to be ‘a terminal point of the creative process, but rather, a site of navigation, a portal and a generator of thought.’ Our decision to present this new work by Akram results from the fact that it operates along an axis of interrogation that sits within the same vein of criticality that we have in mind for the pavilion itself.”

APEAL – Association for the Promotion and Exhibition of the Arts in Lebanon (Commissioner):
“There is a natural synergy between Zaatari’s approach to the creative process and Bardaouil and Fellrath’s curatorial practice. They both work as archeologists in a sense. For his part, Akram weaves personal narratives and histories while collecting documents and objects to rewrite contested histories and explore the politics of making and circulating images. Sam and Till are always seeking to unpack the curatorial mechanisms, modes of visual display and literary representation by which the artist and the artwork are framed and evaluated through an ongoing excavation of art-historical narratives that can be positioned as alternative frameworks for the reconsideration of the contemporary moment of artistic production.

“There is an amazing story lying at the heart of what will be presented at Venice making it most suited for the context of a national pavilion,” everybody concluded.

Venue: The Arsenale
(adjacent to the artistic director’s main exhibition)