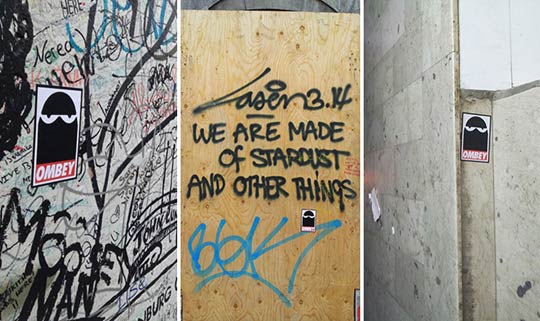 Picture is a courtesy of artinfo.com

Nicholas Remsen, the author of the article, usually writes fashion reviews for Blouin Artinfo but this time he made a focus on Kuwaiti art scene. Amongst 100+ relevant and significant topics about Kuwaiti art scene: auctions, censorship case, upcoming  first participation of Kuwait in the Venice Biennale / Art, etc., etc., etc., was chosen a topic known to a very few people in Kuwait, but featured as almost mega-trend in the entire Middle Eastern region and it’s about OMBEY: Kuwaitifiying of famous work OBEY by US Artist Shepard Fairey. Is that the sign indicating ArtInfo become more one-day fashion magazine than a valid art source ? It really seems so.

Sulaiman Al-Bader and Farah Al-Kandari of the local creative think-tank Doghouse Collective are among those traversing the sinews connecting old country with new context — which, whether or not the government likes it, means incorporating into their Islamic culture a more progressive posture. Effectively, they look to the West, but without abandoning their national or personal identities.

One of the Collective’s concepts is called OMBEY, which is an Arabic spin on Shepard Fairey’s ubiquitous OBEY artwork. According to Al-Bader, OMBEY translates loosely to “Oh My God.” “It’s an old school term,” he adds, “very old lady-like.” The homage doesn’t stop there; the duo have swapped out Fairey’s Andre the Giant, who appears above the OBEY text-line, and inserted their own local face, a veiled woman named Qumooth (meaning mystery and ambiguity). So far, they’ve only printed the design on stickers — which have since spread the world over, with sightings from New York City to Mauritius — with other merchandise in the pipeline.

“The goal [of starting] with the stickers was to get people to stop and take a minute to notice and question their surroundings,” says Al-Bader. “There’s a lot going on in the Arab world, but most of us are oblivious because we naturally get swept up in the ‘everyday’ of our lives.” It’s a heartfelt point, considering the conflicts and subsequent global spotlights on many of Kuwait’s regional neighbors.

Al-Bader admits they could have created an entirely original typeface and motif in lieu of referencing Fairey, but adds, “You have to understand that importing expertise and designs into our culture is very Arab. Western opinions, experience and know-how are deified here, which made the Kuwaitifying of OBEY seem oh so right.”

Oh so right, indeed, for not only does OMBEY embody the hype and trendiness of worldwide street art and youth culture, it also invokes something arguably deeper and intrinsically more local — that of the veiled woman, with an emphasis on her hijab, or burka. It’s an interesting paradigm, for here is a traditionally Muslim article of clothing, which for all intents and purposes is meant to conceal, yet with OMBEY it’s used as a symbol to suggest thinking openly and candidly about what’s going on in our extended peripheries. Whether one practices Islam or not, the veil has become an associative property of the region. It’s thus with a national and cultural resilience that Al-Bader and Al-Kandari “Kuwaitified” the otherwise American artwork. Moreover, it’s particularly exhilarating to see this kind of thinking where freedoms of expression are not necessarily as liberal as our own.