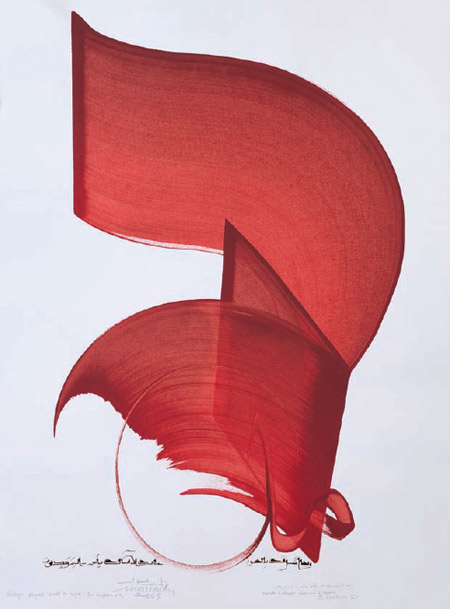 Hassan Massoudy
Born Najaf, Iraq, Massoudy started work in Iraq as an apprentice calligrapher. In 1969, he moved to Paris where he studied figurative art and painting at the Ecole des Beaux Arts. He continued calligraphy, creating covers for Arabic magazines. In 1975, upon finishing his studies, he returned fully to the art of calligraphy. His calligraphies have accompanied a number of texts and poems which have been drawn from world literature – medieval Sufi mystic writer Ibn ‘Arabi, philosopher Jean Jacques Rousseau, poet Charles Baudelaire, and Chinese Tchouanng-Tseu among many others. Massoudy has been a key figure in introducing the art of Arabic calligraphy to wider audiences. He lives and works in Paris.

Lassaad Metoui
Born in Gabes, Tunisia Metoui is an artist and calligrapher. He studied at the Atelier des Beaux Arts, and then pursued his training in history of art in Nantes, and Latin calligraphy in Toulouse. He teaches calligraphy (Arabic and Latin) in France, Europe and North Africa while organizing workshops and participating in a number of conferences. His work includes publications on the art of calligraphy and books where his calligraphic designs accompany text and poetry by various authors, among them Khalil Gibran, Umar Khayyan and Malek Chebel. Metoui lives in France.

Exhibition will continue through to Thursday 21st February, 2013