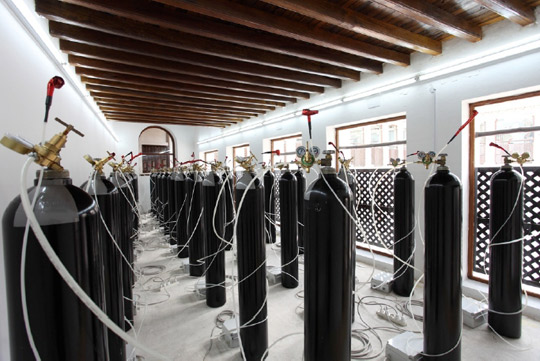 Sharjah Art Foundation presents Lara Favaretto: Just Knocked Out, a survey comprising works by the artist from the past 15 years along with a new site-specific installation. The exhibition also features the first presentation of the extensive archive of images that the artist has collected as source material and inspiration. Organised by MoMA PS1 Curator Peter Eleey, and co-organised by MoMA PS1 and Sharjah Art Foundation, the exhibition is on view at Bait Al Serkal, Arts Area, until February 6,
2013. It was previously on view at MoMA PS1 in New York from May 3–September 10, 2012, where the artist created a site-specific installation that extended through all the galleries.

For the Sharjah exhibition, Favaretto presents a new site-specific work titled ICHI (2012), comprising 118 iron scaffolding pipes from Sharjah, one of which is completely encased in red wool thread; the work was created with a Syrian weaver in Sharjah. The new work evokes many of the aspects of the building in which it is displayed, such as the buildingʼs construction and institutional structure. This exhibition also includes an additional work titled Black 6C that was not included in New York, which consists of a found painting wrapped in black wool.

The playful, celebratory visual language of Favarettoʼs art can be misleading. Despite her workʼs evident humour, a tragic undercurrent runs throughout the artistʼs practice. Numerous pieces are subjected to forces of decay, consumption, and obsolescence, and gradually decompose or exhaust themselves. Though Favaretto represents the eventuality of loss, she also resists it, reusing discarded construction materials, recuperating old paintings and lost luggage, and recycling elements from previous installations as new works.

In both her installations and individual works, Favaretto repeatedly reminds us of the choices we make, and of those that are made for us. Balanced between aspiration and failure, she enacts a conflicted kind of freedom, an illusion of autonomy and control where finally neither may exist. Much of Favarettoʼs work alludes to the casualties of modern life, often referring to the body and the natural environment through mechanical and industrial forms that change and degrade. A platoon of compressed air tanks randomly empties itself, blowing silent party favours in a weak salute; fans constantly recompose a landscape of confetti. These animist machines celebrate their absurdity, taking on lives of their own.

Lara Favaretto was included in the 9th Sharjah Biennial in 2009, where she showed a large- scale site specific installation entitled Simple Couples (2009) and Solo Se Sei Il Mago (Only if you are a Magician) (2006).

About Lara Favaretto:
Italian artist Lara Favaretto (b. 1973, Treviso, Italy) provokes and engages her audiences with work that is both playful and celebratory while paradoxically evoking the inevitability of failure and decay.

She is a graduate of Kingston University, London, UK (1997) and Accademia di Belle Arti diBrera, Milan, Italy (1999). As part of an advanced course in Visual Art at the latter, she spent 1998 as Hamilton Fulton Visiting Professor at the Fondazione Antonio Ratti, Como, Italy. In 2008 she was artist-in-residence at the Isabella Steward Gardner Museum, Boston, USA, the Hayward Gallery, London, UK, and the Proa Foundation in Buenos Aires, Argentina. She has received numerous awards including the Querini Stampalia Prize for Young Italian Artists (2001), a scholarship for Studio Program, MoMA PS1, New York, USA (2002 – 2003) and a scholarship for the Castello di Rivoli, Torino, Italy (2004). In 2005 she won the Venice Biennale Young Italian Art Prize. Favaretto currently lives in Turin, Italy.

About the Curator, Peter Eleey:
Peter Eleey is the Curator of MoMA PS1 in New York, USA, where he most recently organised survey exhibitions of Huma Bhabha, George Kuchar, Thomas Lanigan-Schmidt, and Henry Taylor. Coinciding with the 10th anniversary of 9/11, he curated September 11, which was composed largely of work created prior to the attacks. From 2007-2010 he was the Visual Arts Curator at the Walker Art Center in Minneapolis, USA, prior to which he served as Curator and Producer at Creative Time, a public art organisation founded in New York in 1974. He regularly teaches, lectures and contributes texts to journals and catalogues internationally.

About MoMA PS1:
MoMA PS1 is one of the oldest and largest contemporary art institutions in the United States. An exhibition space rather than a collecting institution, MoMA PS1 is a catalyst and advocate for new ideas, discourses and developments in contemporary art and culture. The institution was founded in 1971 by Alanna Heiss as the Institute for Art and Urban Resources Inc. and since
1976 has been housed in a 100-year-old Romanesque Revival school building in Long Island
City, Queens. In 2000, it became an affiliate of The Museum of Modern Art.

About Sharjah Art Foundation (SAF):
Sharjah Art Foundation brings a broad range of contemporary art and cultural programmes to the communities of Sharjah, the UAE and the region. Since 2009 SAF has built on the history of cultural collaboration and exchange that began with the first Sharjah Biennial in 1993. Working with local and international partners, we create opportunities for artists and artistic production through our core initiatives that include the Sharjah Biennial, the annual March Meeting, residencies, production grants, commissions, exhibitions, research, publications and a growing collection. Our education and public programmes focus on building recognition of the central role art can play in the life of a community by promoting public learning and a participatory
approach to art. Sharjah Art Foundation is funded by the Department of Culture and Information, Government of Sharjah.