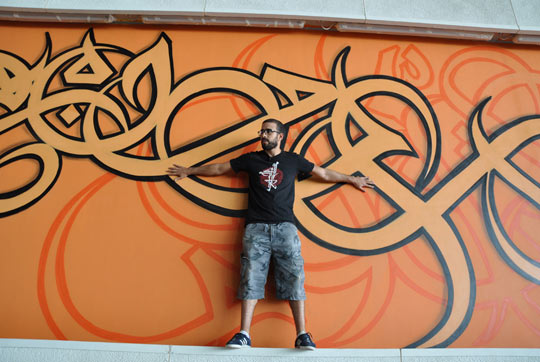 Over a period of four months, following a series of successful workshops with students at the Museum of Islamic Art in 2010, eL Seed has embarked on the execution of these spectacular works with a group of alumni from Virginia Commonwealth University in Doha. Each features different and unique themes inspired by Qatari culture and draws on el Seed’s interest in Arabic calligraphy fused with contemporary street art, which he refers to as ‘calligraffiti.’

Arabic script has been the subject of a major revival of interest amongst young people in the region. Graffiti writers are increasingly experimenting with calligraphy on walls, and young designers are creating new fonts and type designs in books, galleries and public spaces. Commenting on the project, eL Seed said: “Arabic graffiti is getting its time in the spotlight nowadays and I believe that this kind of street art deserves attention. I’m honoured to be working with Qatar Museums Authority and Ashgal and delighted that my work will be at the heart of such a vital infrastructure facility in Doha. This project is one of the most innovative projects I’ve worked on.”