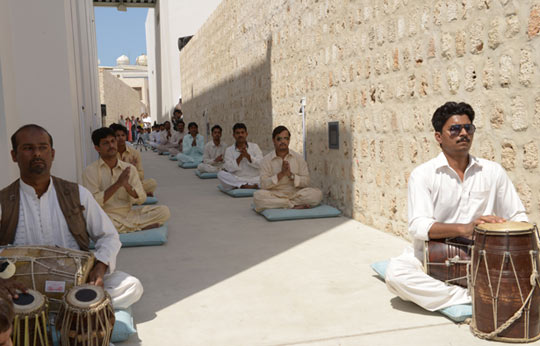 Sharjah Art Foundation (SAF) announced the recipients of the 2013 Sharjah Biennial Prize on March 13 at the opening night of Sharjah Biennial 11, Re:emerge – Towards a New Cultural Cartography, on view through May 13, 2013. The seven recipients of this year’s prize totaling 40,000 USD are Apichatpong Weerasethakul and Chai Siri, Tiffany Chung, Wael Shawky, Monir Shahroudy Farmanfarmaian, Magdi Mostafa, and Fumito Urabe.

The 2013 prize jurors were Bassam El Baroni, a curator and art critic based in Alexandria, Egypt; Hu Fang, the Co-Founder and Artistic Director of Vitamin Creative Space and the Pavilion in Beijing, China; and Sarat Maharaj, Professor of Visual Art & Knowledge Systems, Lund University & the Malmö Art Academies, Sweden.

The award for an outstanding contribution to Sharjah Biennial 11 (SB11) was presented to Apichatpong Weerasethakul and Chai Siri—two artists devoted to independent and experimental filmmaking—for the video Dilbar (2013), a portrait of a Bangladeshi builder working on the new art spaces of the Sharjah Art Foundation. Two awards were presented for an exceptional contribution to SB11, the first to Tiffany Chung, for her ink- and oil-based coloured cartographic drawing and installation works examining conflict, migration, urban progress, and transformation in relation to history and cultural memory. The second was given to Wael Shawky for Dictums 10:120, a multi-part project in which a chorus performs a traditional qawwali song, comprised of fragments of curatorial text from the last Sharjah Biennial, translated into Urdu.

A special recognition award for a practice sustained over many decades was presented to Monir Shahroudy Farmanfarmaian, who has had a long career creating work with a strong connection to the history of Iranian reverse-glass painting and mirror mosaics, a craft traditionally passed on from father to son. Additionally, two awards were presented for an artist whose work shows promise: Magdi Mostafa, for sounds cells: FRIDAYS (2010), an abstract evocation of the artist’s Cairo neighbourhood, Ardellawa, as heard on Fridays, a day of prayer and household chores; and Fumito Urabe, for Drifting Through (2013), an installation of found objects that explores the intersection of Eastern philosophy and contemporary art.

More than 100 artists, architects, and musicians are participating in SB11. The list of artists is online here.

About the Sharjah Art Foundation (SAF)
SAF brings a broad range of contemporary art and cultural programmes to the communities of Sharjah, the UAE and the region. Since 2009, SAF has built on the history of cultural collaboration and exchange that began with the first Sharjah Biennial in 1993.