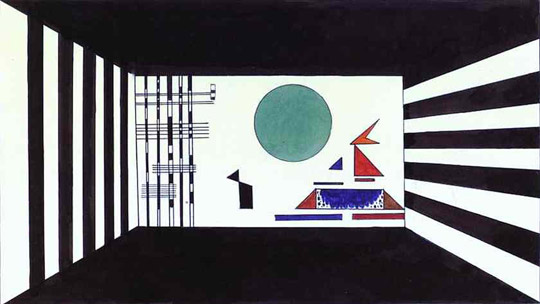 Wassily Kandinsky meticulously prepared his stage composition The Yellow Sound for production in Murnau on the eve of the First World War, but was not destined to see it on stage. Nevertheless, the “synthesis of arts” idea, so to speak, was in the air. In 1924, another “Blue Rider” member, the Austrian composer Arnold Schoenberg produced his Die Gluckliche Hand (The Happy Hand), a musical drama for choir and orchestra. Kandinsky took another step towards translating the idea of “monumental art” into life when he staged Modest Moussorgsky’s “Pictures at an Exhibition”, with his own sets and light, color and geometrical shapes for characters. When he returned to Germany after the end of the First World War, Kandinsky for several years taught at the Bauhaus Higher School of Construction and Design, known for its experiments in stage art with the participation of school students. Kandinsky was invited to make a stage composition to music by Moussorgsky. It was the first and only time when he agreed to use a readymade score − an obvious evidence of his profound interest.

On April 4, 1928, the première at the Friedrich Theater, Dessau, was a tremendous success. The music was played on the piano. The production was rather cumbersome as the sets were supposed to move and the hall lighting was to change constantly in keeping with Kandinsky’s scrupulous instructions. According to one of them, “bottomless depths of black” against a black backdrop were to transform into violet, while dimmers (rheostats) were yet to be invented.

Unfortunately, the original stage sets have not survived, nor are there any photographs. All that has remained are the sixteen watercolors of Kandinsky now kept at the Pompidou Centre, yet they are so fragile that they are not even on show in the permanent display. Also there is the piano reduction, which belonged to Felix Klee (Paul Klee’s son) who assisted Kandinsky in that project. This absolutely unique document details nearly every bar with an instruction as to what was to go on stage. This performance has been revived, thanks to an animated film devised by Mikhaïl Rudy, based on the stage directions and Kandisky’s preparative watercolors, which were conserved at the Pompidou Centre. The film was presented in concert for the first time at the Cité de la Musique, Paris, in 2010, accompanied by a live performance by Mikhaïl Rudy. it has since screened in many countries.

“Color is the keyboard, the eyes are the hammers, the soul is the piano with man strings. The artist is the hand that plays, touching one key or another purposively, to cause vibrations in the soul”  Wassily Kandinsky

The screening is part of CAP visual educational program and entrance for this film is free of charge.