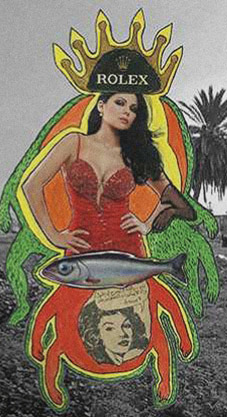 Since his academic studies, and even before, experimentation and research have always been the major driving forces in Faisal Samra’s exploration of the plastic arts.

He constantly tries to break the prevalent forms and types of artistic expression until he reaches a stage where his own work rebels on itself and creates another pattern of expression. In the mid 1980`s his major concern was to develop an artwork that eliminates the borders between different fields of the plastic arts.

In 1989, he dissolved the border between painting and sculpture by freeing the treated canvas from the frame, this treatment enabled him to open a dialogue between the artwork and its context. The canvas itself became the body of the work. In other words, the constructive materials became the form and the content of the artwork itself.

Since 1989 he have sought to express the “Other Body” of his work with mixed media and multimedia, such as digital photography, installation, video, video installation and performance in subsequent exhibitions.

The talk will shed light on Samra’s work starting from his commencement (1979) until present, stressing on his latest video-installation “Shanty” in particular. Where He will talk about this installation, the video itself, the storyboard, the making of and the technical information of this project. In “Shanty”, Faisal exposes five different personalities and their different types of poverties. Those characters are in a continuous cry for help, as their main concern is to raise awareness about their daily struggle in their lives. Some of them are indifferent and accept their fate with modesty and dignity, and resignation is not an option for them. However, the artist’s primary concern is to showcase the identity sphere of poverty. He does this by drawing the attention of the audience to individuals attempting to break the wall of silence between the social layers of the city. It is off note that the artist immersed himself in the daily life of his characters for several weeks.

Faisal Samra was born in Bahrain, in 1956, he graduated with honors from the Ecole Nationale Superieure des Beaux-Arts in Paris. He worked as a stage designer for Saudi television, before joining the Insitut du Monde Arabe (Paris) as an art and graphic design consultant. From 2003 he taught in the Fine Arts department of Amman University in Jordan as well as the Faisal Samra Studio in Bahrain. In 2005 he began an artist residency in Paris at the Cite International des Arts. Samra has lived and worked many places such as Paris, New York, Beirut, and spent time in Morocco and the far-east. Samra describes himself as a “nomad wandering through time”. Immersion in these various cultures participates in the diversity reflected in his art. His work is a criticism of a visual culture imposed by the mass media, advertisements or political communication and demonstrates the artist’s opposition to their large-scale manipulation.