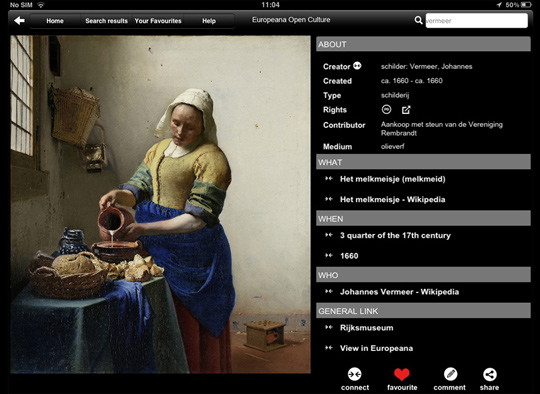 ‘Europeana Open Culture’ introduces the public to hand-picked and beautiful collections from some of Europe’s top institutions, and allows people to explore, share and comment on them.

Europeana Open Culture presents stunning visual collections from Europeana.eu with large images – great for those smaller details – and a ‘comment’ option that opens up the possibility for dialogue between many people exploring the same images.

Jill Cousins, Europeana Executive Director says: ‘We’re really pleased to launch the first ever Europeana app. By downloading Europeana Open Culture, more people can now explore, share and have fun with Europe’s cultural heritage. It’s only a small snapshot of the whole of Europeana’s collections but small is beautiful. We’re enthusiastic and excited about the ‘Connect’ feature which you can use to link images to articles elsewhere on the web, or to content in Wikipedia. And for the first time, you can make your own comments on the individual images.’

The 350,000 images available through the app come from collections as diverse as:

Once you’ve downloaded the free app, start exploring by entering a keyword in the search field or by selecting one of the five themes. Tap a thumbnail to view the image in full resolution, read other users’ comments, post your own impressions and connect the image to other relevant pages on the web (for instance, Wikipedia). You can also add the image to your favourites and create your own personal museum.

All images included are either in the public domain or are openly licensed which means they can be used for any purpose, for example in a school project or a thesis, in a presentation to your local history society, on blogs, Wikipedia, or even commercially. What’s more, Glimworm IT have released the open source code behind the app, meaning that developers can get hold of it, use it and experiment with it.

Paul Manwaring, Creative Director of Glimworm IT, commented: ‘We started work on an interactive museum idea at the Europeana hackathon in Leuven, which became Muse Open Source – a free software platform. We then released the Muse app for the Rijksmuseum. After this success, Europeana asked us to create an app for them – they wanted something open source so that other developers could build on it. We were delighted that they really got the idea of using an app to make digital libraries and archives fun and accessible. We are really happy that the new Europeana app is helping people to enjoy culture in new ways.’

Europeana brings together the digitised content of Europe’s galleries, libraries, museums, archives and audiovisual collections. Currently Europeana gives integrated access to nearly 27 million books, films, paintings, museum objects and archival documents from some 2,200 content providers. The content is drawn from every European member state and the interface is in 29 European languages. Europeana receives its main funding from the European Commission. 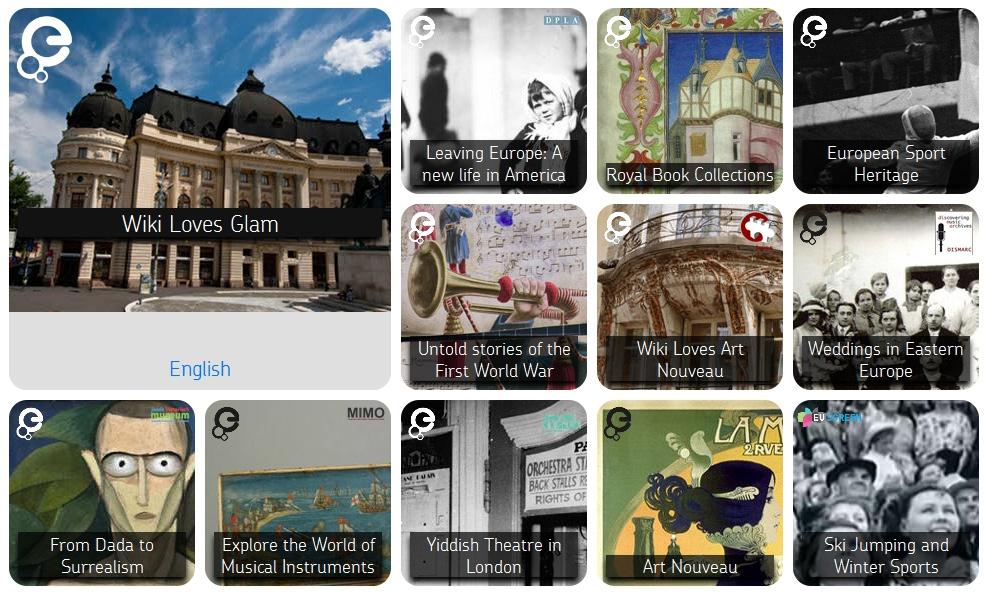 Free iBiennale for iPad and iPhone
The National Gallery of Art launched ‘Your Art’ ...
The Guggenheim Museum creates its first mobile app for Mauri...