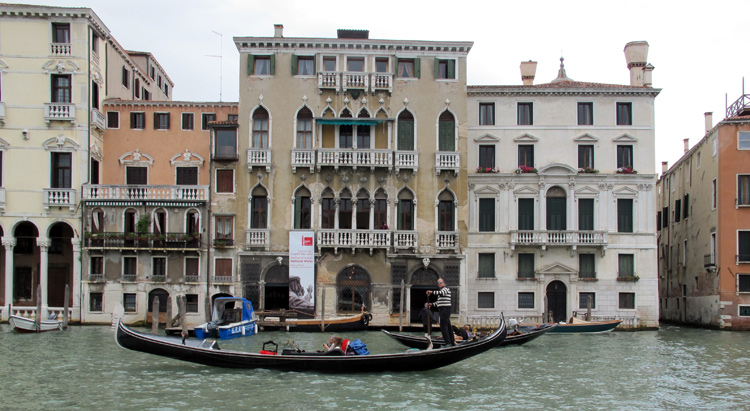 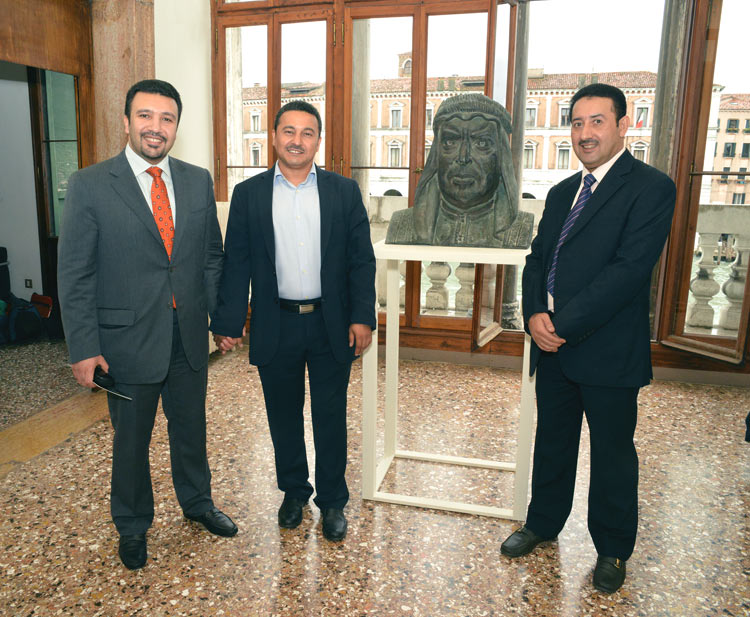 In the year of its political independence, Kuwait welcomed its new-found prosperity by declaring a willingness to share its future wealth with its neighbors. The time was dedicated to institutional building in preparation for and accommodation of a growing influx of investments. The country’s urban landscape soon became an open-air museum of national and international performances of construction, creation and political manifestation. Kuwait’s state guests were taken to active hubs for production and services for youths. Depictions of guest palaces, new or renovated schools, institutions, and public areas in Kuwait were published extensively as postcards in celebration of the country’s development. Students at schools and artists at the Free Atelier, founded in 1959 as evening open studios in a school premises, were encouraged to learn from the development and change underway in Kuwait and advised to develop works depicting this modernization. Sculpture was the art form that the Kuwaiti art scene was best known for. Sami Mohammad is one Kuwait’s most prominent sculptors. 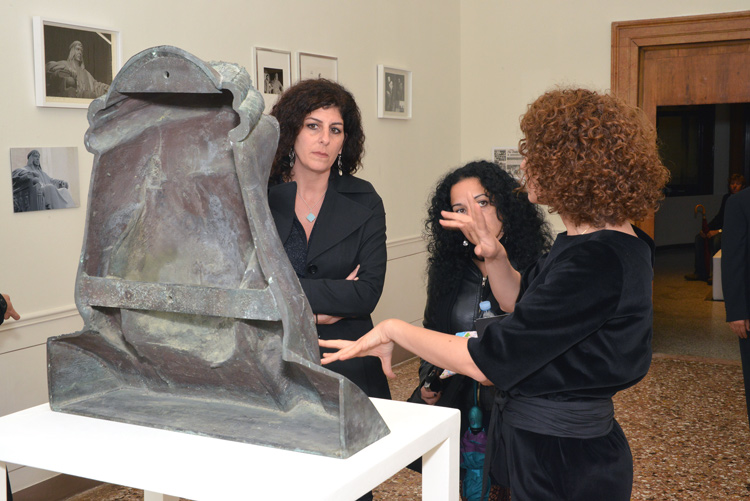 Curator Ala Younis in an exhibition tour

Within the country, the proportions of the built environment started to grow, reducing the size of individuals in relation to their surroundings. Images of figures standing amidst construction, near or on top of mega structures, operating machines triple their size, or gearing oil pipes to pump the equivalent of millions of dinars, reverberate strongly with Sami Mohammad’s celebratory act of making honorary statues of the late 11th and 12th Emirs of Kuwait. The exhibition explores these two major works by Mohammad along with a new photographic project by Tarek Al-Ghoussein, within the framework of a time when modernist projects, cultural or contractual, were considered national works. 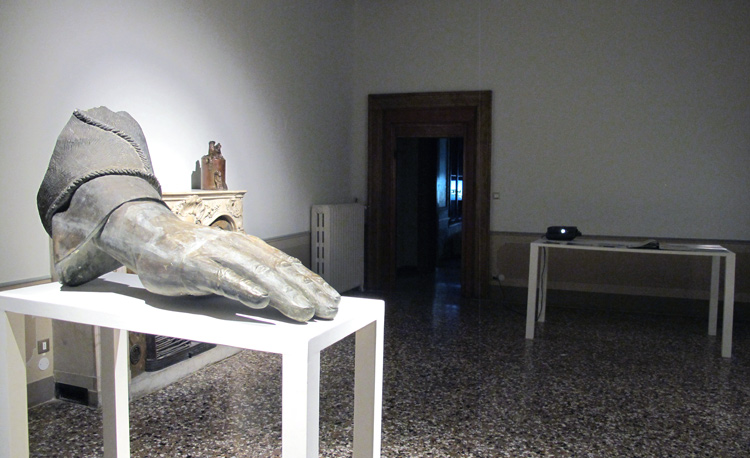 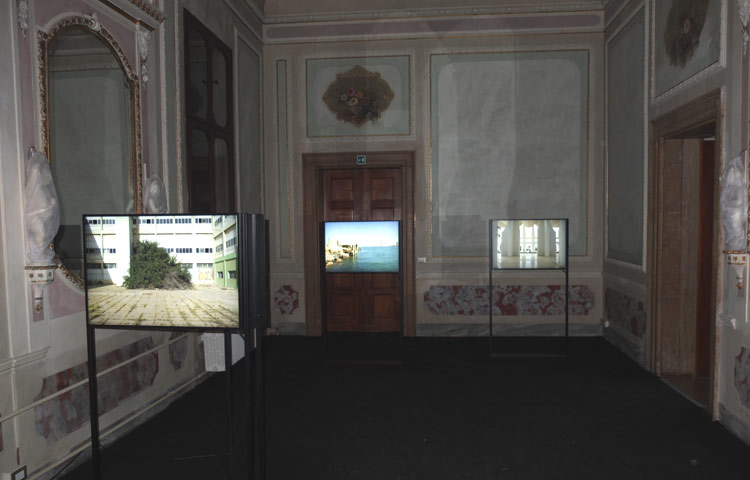 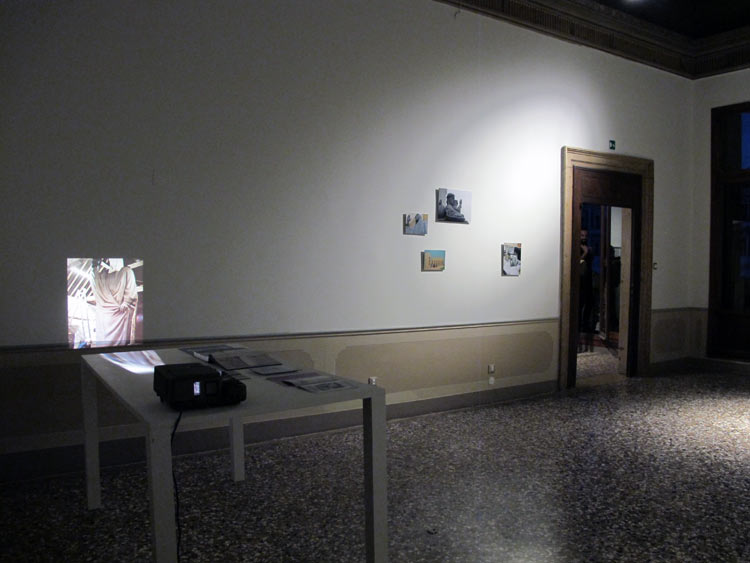 The stories that surround and images that document Sami Mohammad as he stands next to a statue of a Sheikh twice his size in a foundry in London are, therefore, of an interesting quality; they illustrate an alternating power dynamic between an artwork and its maker, a state and its citizen, a ruler and his subject, a legacy and its inheritor, and a challenge and its acceptor. The artist does not speak of the uncertainty and fear of rejection he experienced in the months of making his statues; he does not tell of how he had to confirm with the commissioner of the work the resemblance of the bust, which was first made in Kuwait, before being transported to London for the remainder of its body to be cast in bronze. Up a scaffold, Mohammad climbed to build a gesturing body – the same body that would later bear, with the nearby body of its predecessor, wounds from bullets fired by the Iraqi army during the invasion of Kuwait in 1990. The artist himself had to escape the pursuit of these same soldiers as they attempted to capture and oblige him to create a statue of Saddam Hussein. The statues speak of a time of nation-building, of national works by the state for the people and the people for the state, of works that match the scale of good fortune that found its way to Kuwait. 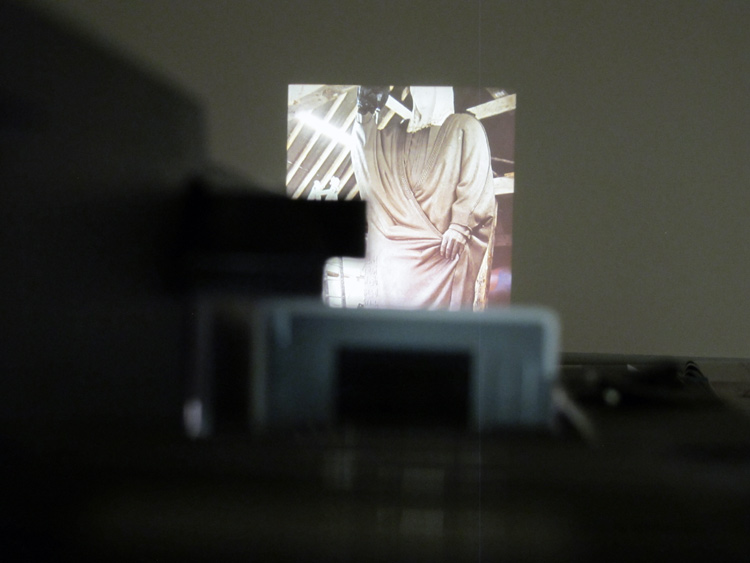 Tarek Al-Ghoussein’s series of photographic works is part of K Files, an extensive archive the artist is building from material obtained from family albums, antique shops, the Internet and other sources. He uses the term “files” to refer to either camera files or documents that he has compiled. The photographs document interactions with sites of grandness and of significance in Kuwait’s development, in an attempt to consider an individual’s position within a national body. 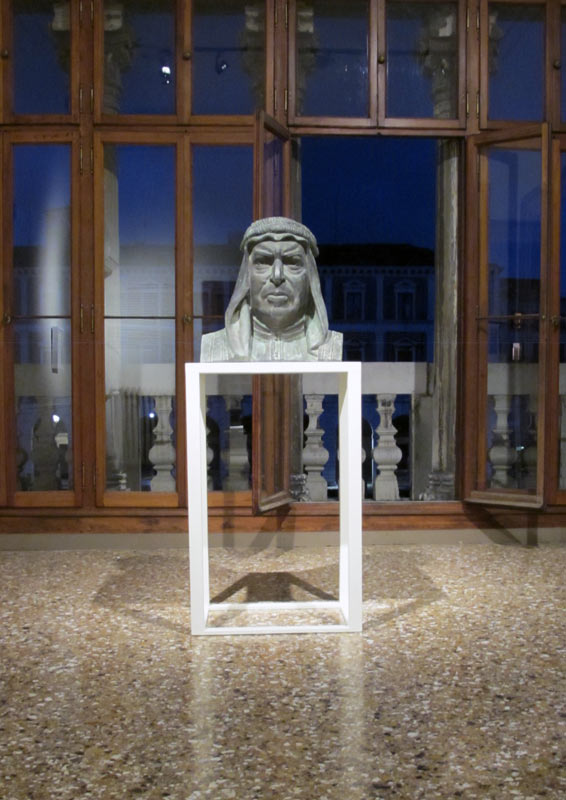 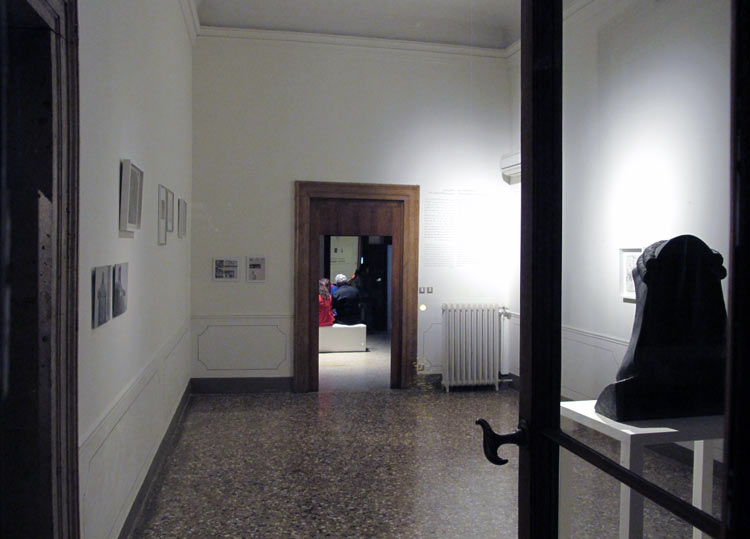 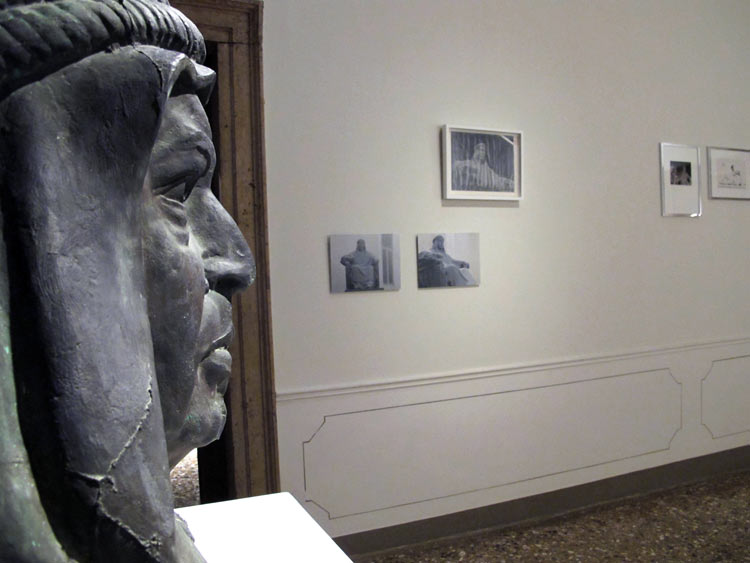 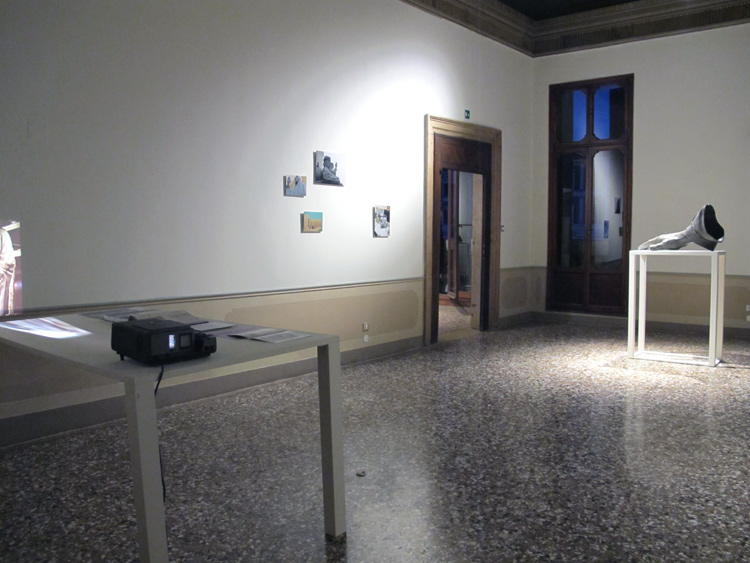 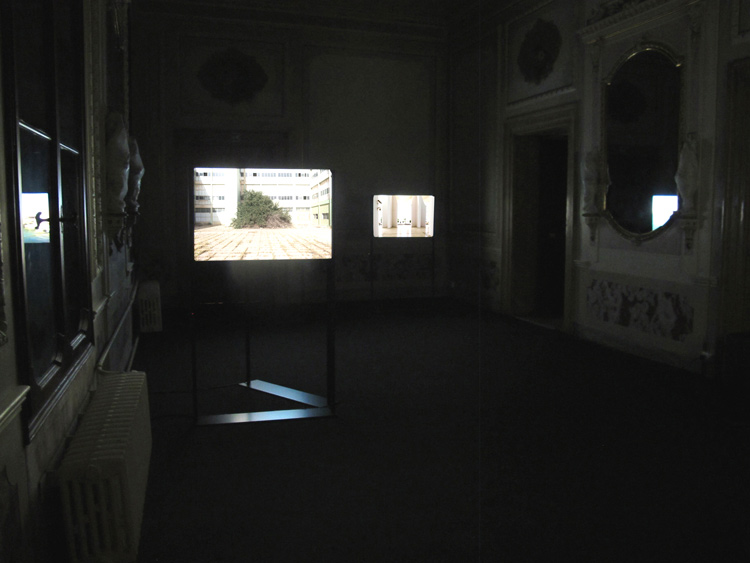 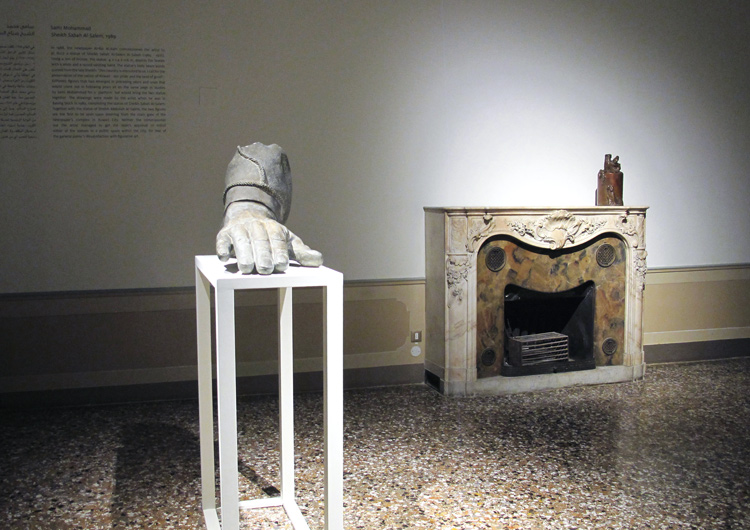 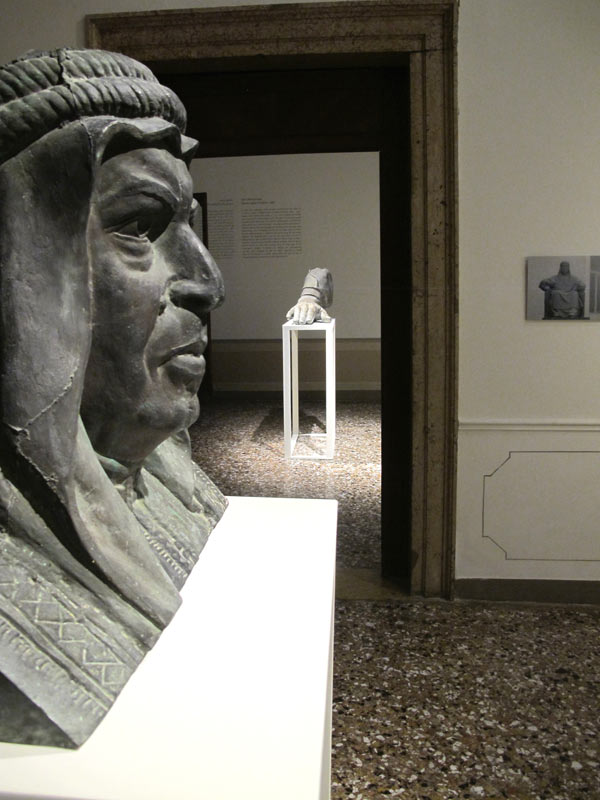 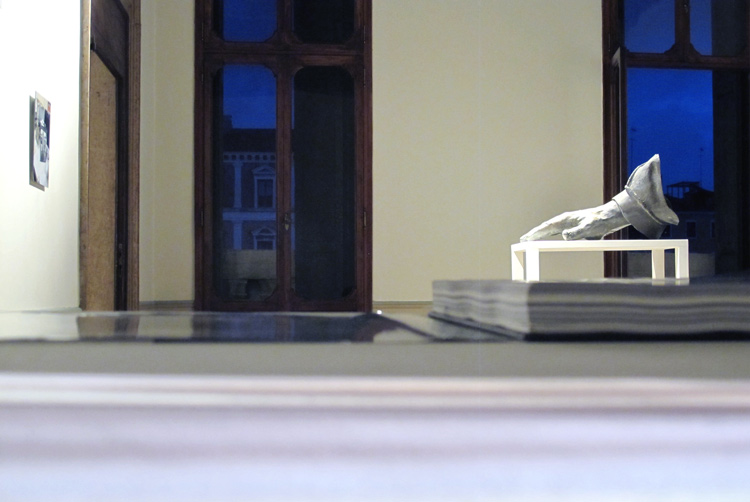 The statue of Sheikh Abdullah Al-Salem Al-Sabah (1951 – 1965) was produced after the artist’s proposal won in a competition conducted by the founder of the newspaper Al-Rai Al-Aam, itself established in 1961. In 1971, Sami Mohammad moved to an empty 200 square meter piece of land owned by the newspaper to build the statue, which was initially made in gypsum, and later cast in Bronze when funds permitted. The statue, 3 x 2.5 x 1.7 m, depicts the late Sheikh sitting in a chair, in an awe-inspiring position, with a firm gaze and an outstretched foot. The left arm of the statue rests on a big book that alludes to the constitution. Sami Mohammad wrapped the statue with figures of citizens, men and women, from the different professions, and with different causes. Under the constitution are a builder, worker, doctor/lawyer, and student. On the right side, a blind-folded woman carries the balance of justice and two girls flank her, one with an olive branch symbolizing peace and the other with a dove standing in for freedom. The back of the statue features the body of a sailor, similar to a sculpture produced by the artist in 1970.

In 1988, the newspaper Al-Rai Al-Aam commissioned the artist to produce a statue of Sheikh Sabah Al-Salem Al-Sabah (1965 – 1977). Using a ton of bronze, the statue, 4 x 1.4 x 0.6 m, depicts the Sheikh with a smile and a raised saluting hand. The statue’s body bears words quoted from the late Sheikh: “This country is entrusted to us. I call for the preservation of the nation of Kuwait – our pride and the land of good”.

Different figures that had emerged in preceding years and ones that would come out in following years sit on the same page in studies by Mohammad for a podium or platform that would bring the two statues together. The drawings were made by the artist when he was in Basing Stock in 1989, completing the statue of Sheikh Sabah Al-Salem. Together with the statue of Sheikh Abdullah Al-Salem, the two figures are the first to be seen upon entering from the main gate of the newspaper’s complex in Kuwait City. Neither the commissioner nor the artist managed to get the state’s approval to install either of the statues in a public space within the city, for fear of the general public’s dissatisfaction with figurative art.

“There were certainly many obstacles, but they all disappear into the distance when I see people stand in front of my work full of admiration and appreciation. They strongly inspire me to continue working for my dear nation.” (Sami Mohammad)

The exhibited images constitute part of a larger body of work titled K Files, which tracks the journey of photographs and other documents relating to the artist’s immediate family. The material was purchased from internet sites such as eBay and Amazon, among others. K Files marks a departure from earlier work that was often shot anonymously.

Tracking historical developments in Kuwait, the photographs document the relation of the artist to the immense scale of the locations within them. The locations were selected to balance the old and new and to present sites relevant to Kuwait’s history and development. They include Qasr Al-Salam, The National Assembly, the Abdullah Al-Salem School, Um Al-Gaz Island, Dar Al-Rai Al-Aam, Al-Nasr Sports Club, and the Kuwait Stock Market. While the hauntingly beautiful sites appear abandoned and utterly devoid of human presence, the presence of the artist as the photographed subject raises questions related to how spaces of significance are transformed through the presence of even a single individual.

Sami Mohammad (b. 1943, Kuwait) joined Kuwait’s Free Atelier as a full-time artist in 1961, and volunteered for the Kuwaiti Civil Defense during the Iraqi – Kuwaiti border dispute in that same year. The Free Atelier provided Mohammad with a stipend that allowed him to devote his time to developing his artwork after 1962. He participated in all the spring exhibitions held every year at Al-Mubarakiah School, and was sent to study at the Faculty of Fine Arts in Cairo in 1966. Along with the other Free Atelier artists, he co-founded the Kuwaiti Society for Formative Arts in 1967 and the Biennial for Arab Art in 1969. He was later granted another scholarship to study at the Johnson Atelier Technical Institute of Sculpture, New Jersey, in 1974. The artist has represented Kuwait in regional and international exhibitions since 1972.

Tarek Al-Ghoussein (b. 1962, Kuwait) spent much of his childhood outside of the country. In 1978, he returned to finish high school and served in the army for one year before moving to the USA to obtain a BFA in Photography from New York University and an MA from the University of New Mexico. In 1990, Al-Ghoussein was called to serve in the Kuwaiti army once again. At the time, policy dictated that men serve at the age of 18 for one year and then again for one year and a half before turning 30. On 17 January 1991, Al-Ghoussein’s 29th birthday, the plane the artist had boarded en route to Kuwait was prevented from departing due to the outbreak of the ground war with Iraq. Unable to return to the USA, Al-Ghoussein moved to Egypt, then to the UAE, where he taught photography at the American University of Sharjah for 15 years. He is currently a professor of visual art at New York University’s Abu Dhabi campus.

Curator: Ala Younis
Born in Kuwait, based in Amman, Younis curated several projects including Covering One’s Back at Gezira Art Center in Cairo (2013), Museum of Manufactured Response to Absence (MoMRtA) at the Museum of Modern Art in Kuwait (2012), Out of Place at Tate Modern and Darat Al Funun (2011), Momentarily Learning from Mega-Events at Makan in Amman (2011), and film programs for Arab Shorts, independent Arab film screening programs in Cairo (2009-2011).

Images and text are courtesy of Kuwait Pavilion and Ala Younis 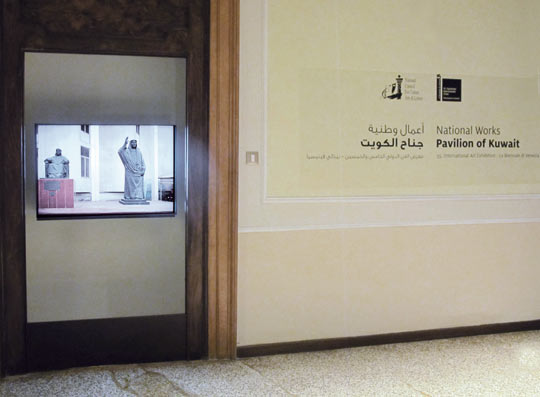