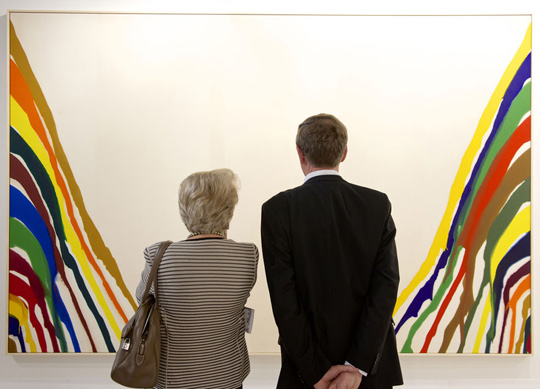 This year, 304 leading international galleries present 11 decades of work, ranging from the Modern period of the early 20th century to the most contemporary. The Basel show presents a geographically diverse selection of galleries from 39 countries and territories across five continents. While galleries from Europe continue to be strongly represented, the show offers exhibitors from across the globe. This year’s edition sees the largest-ever number of exhibitors with spaces in the Asia-Pacific region at the show.

As large and lively as ever, with 304 galleries exhibiting from 39 countries, Art Basel is still a magnet for big-money collectors and museum directors. Among those at the invitation-only opening on Tuesday were New York financiers like Donald B. Marron and Leon Black, the Miami collectors Donald and Mera Rubell and the Russian oligarch Roman A. Abramovich. Also seen perusing booths was Richard Armstrong, who runs the Solomon R. Guggenheim Foundation; Alain Seban, president of the Pompidou Center in Paris; and Nicholas Serota, director of the Tate in London.

“Collectors these days are looking for artists that have museum and curatorial support,” said David Maupin, one of the gallery’s founders.

“I’ve been coming here since the 1980s, when dealers would bring works they couldn’t sell in their galleries,” said Jeffrey Deitch, director of the Museum of Contemporary Art in Los Angeles. “Now these dealers are like museum curators, working for months on their installations.”
……

NYTimes –  At Art Basel, an Unslaked Appetite for Buying