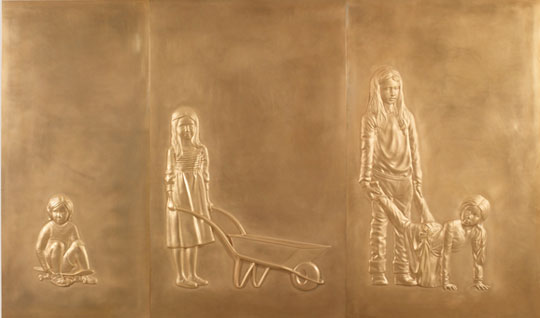 “Art is a fire that cannot be put out…”–Adel Abdessemed

Mathaf: Arab Museum of Modern Art is pleased to present a landmark exhibition by Adel Abdessemed titled L’âge d’or. Curated by Pier Luigi Tazzi, this exhibition will include recent works including drawings, paintings, sculptures and videos, many created by the artist especially for this show in Doha.

Working across a wide range of media, Abdessemed transforms well-known materials and imagery into charged artistic declarations. Abdessemed has described himself as “an artist of acts,” and his works are known for their forceful impact and symbolic resonance. Taking materials into great consideration, he is often provocative in their use; camel bones, gold, salt, brass, gum, and terracotta take on new and multiple meanings.

“Adel Abdessemed’s exhibition is the first major curatorial project produced by Mathaf I will have the pleasure to open since my recent appointment as Director. L’âge d’or is undoubtedly a very challenging show in many ways, one that I hope will resonate with visitors from Qatar and around the world. Adel is an artist with whom I have worked extensively in the past. His work contributes substantially to the debate of ideas and leads the way in the movement towards new concepts in the art scene and the world at large.” –Abdellah Karroum, Mathaf’s Director

New works presented at Mathaf will include the eponymous L’âge d’or, a bas-relief work of gold-plated brass depicting the artist’s four young daughters, and Julie, a life-size sculpture of the artist’s wife made from salt stone from siwa and positioned on a rock local to the region of Qatar. A large-scale terracotta wall relief, titled Shams, depicts and explores the unseen workers of this world. Other new sculptures include Curiosity, a bas-relief in red terracotta, depicting NASA’s robot on the planet Mars; La Chine est proche, a bicycle fashioned from camel bone; and East of Eden, groupings of knives thrust into the ground.

In two new video works, Abdessemed employs the percussive and rhythmic device of a bare human foot repeatedly crushing objects, of high symbolic significance: a white rose (Ayaï) and a skull (Histoire de la folie). In another new video, Printemps, violence is explored as a line of chickens against a wall appear on fire.

The exhibition will also feature a selection of recent works, including Mémoire (2012), a video showing a baboon spelling out ‘Tutsi’ and ‘Hutu,’ referring to the opposing ethnic groups in the 1994 Rwandan genocide; and State (2013), an animation depicting labyrinth-like drawings. Placed throughout the exhibition space will be Soldaten (2013), a series of large-scale charcoal drawings featuring soldiers in full gear who represent the continuous existence of war in our time.

The main atrium of the exhibition space will house Le Vase abominable (2013), a 5.5-meter sculpture, which consists of a tall brass pot positioned on top of an explosive device, a carefully crafted replica bomb. The artwork Little pot (2013) consists of eleven vessels each made from a different material, including gold, gum, and salt. Their repetitive yet incongruous appearance highlights a recurring dichotomy in the artist’s work between décor and fetish. Also on view will be the sculpture Practice ZERO TOLERANCE (2006), a black terracotta car, appearing as if upended by a riot.

Coup de tête (2011–12), one of Abdessemed’s most renowned works, is a bronze sculpture over five meters talldepicting the moment French footballer Zinedine Zidane headbutted Italian Marco Materazzi in the 2006 World Cup final in Germany. It will be installed in the city of Doha, as part of the Public Art program.