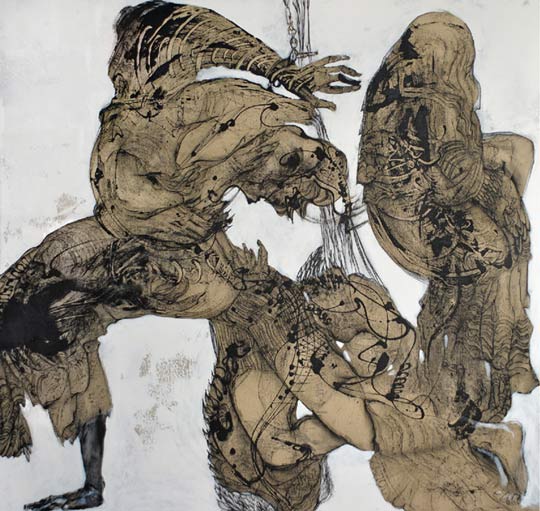 “Kevork Mourad’s paintings carry a sense of history, each one describing a timeline from the ancient past to the abstract future and containing suggestions of the conflict, violence, sadness, passion, and, for better or for worse, humanity that define the course of that timeline. As often as not, the timeline as Mourad envisions it is a vertical one, the abstract and more concrete elements of history piling up on one another like an unstoppable vortex, as in Carved History. Or take, for example, Rebuilding the Tower of Babel. Here, an entire collection of barely discernable objects swirls in an upside-down funnel shape, drawn upward by some supreme force. Is that a book, a church, a woman’s figure? Are those ancient ruins? It’s impossible to tell for sure, but what’s clear is that the same force drawing these objects upward is spinning them so furiously that they’re losing their shapes, melting into whatever matter it was that made them all in the first place. Without the vertical feel and the sense of motion, these melting forms might be mere abstractions. But the orientation and movement add purpose, the suggestion of chaos and creation, a suggestion that implies the accumulation of history, the passage of time, the inevitability of change”. Amy Rosenberg

Kevork Mourad was born in 1970 in Kamechli, Syria from Armenian origin. He received his MFA in 1996 from the Yerevan Institute of Fine Arts in Armenia.