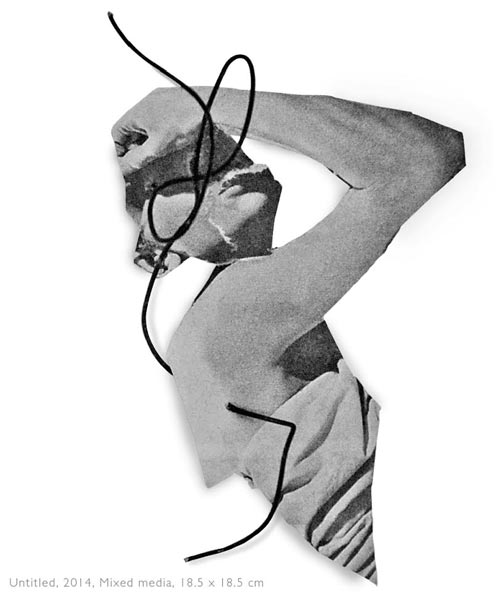 Najeebah Al Ghadban‘s first solo show A White Asylum, featuring a body of collage and assemblage works that developed from the artist’s continuous exploration of the human psyche. This series of portraits depicts the vulnerability of human emotions, in sculptural and photographic detail, utilizing shadows and industrial tools to emphasize the discordance between expressions of heart and entrapment of mind.

The ‘white’ of the asylum, measures the space of existence: the white light of the hereafter, or the white walls of the now. The ‘asylum’ holds the faces, the bodies, the hands, the scenes: the loveless lovers, the modern mythic battles, the liars and the cheats, the violent, but most significantly, the alone. Whether the nameless of the asylum are confined to the id of one mind, or whether they are united simply by the archetype of their disfunction, is for the viewer to decide.

The series began in February 2013 and all of the original collages were fleeting -with no glue – just scissors, x-acto blades and an iPhone camera. The resulting images were immediately published exclusively on Instagram, in order to engage with the public. The series now includes over 200 portraits. Starting in March 2014, the portraits have been preserved in their physical state within white shadow boxes. In addition, the first volume of the A White Asylum artist book was released in December 2013, and included 13 portraits and accompanying prose. Its 240 pages revealed intimate insights into each character’s mind through both text and design. Going forward, A White Asylum will extend to include sculptural forms, performance art, motion graphics and video.

Najeebah Al Ghadban is a School of Visual Arts BFA Design Graduate currently pursuing a Masters in Design also at the School of Visual Arts. Born and raised in Kuwait, she currently resides in New York, refining her cultural skeleton to adapt and absorb human connection through visual communication. Her young design career has primarily focused on the world of publishing and artist books, with a plethora of self-driven projects to sustain the quest for new form ranging from experimental motion films, hand-made zines, to the heart: collage.

My First Solo show / 30 Days 3 artists is a project presenting young emerging Kuwaiti artists for their first solo exhibition in The Art Room, one of Contemporary Art Platform exhibition spaces. This project gives 3 young artists the opportunity to show their work for 10 days each year,within a reflective artistic community supported by CAP Kuwait.

Exhibition is ongoing until 5th of November, 2014