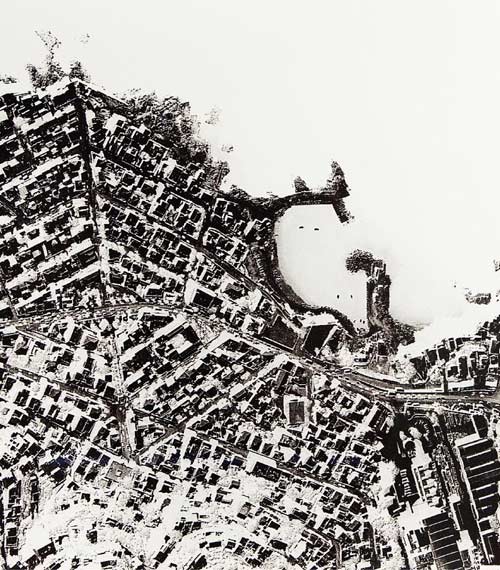 Ali Cherri poses many questions on the politicisation and manipulation of images in Bird’s Eye View at Contemporary Art Platform (CAP) Kuwait. The exhibition includes a selection of works from 2010 to present that draw lines between the historical, political, informational and personal to deconstruct systems of thought and ultimately of power. In redefining the very concept of a fact, he highlights the simultaneous gravity and banality of historical events and their consequences, while also acknowledging the conflicting narratives and emotions surrounding them.

The two-channel video installation Pipe Dreams (2012) incorporates documented events, archival images, images from the current Syrian uprising and non-historical and non-factual images, thus remixing truth and revaluing information. This democratisation of material is further complicated by its presentation on two separate and overlapping screens, one of which is a tv, the iconic yet mundane object through which information is created to be consumed en masse. This same object famously delivered images around the world of the early space missions, and of astronauts finally reaching into the unknown. This symbol of human achievement is present in both Pipe Dreams and Heroes (The Rise and Fall) (2013) where an astronaut stands in a relaxed position holding a helmet under the arm, and without a head. The sculpture is made of brass and granite cast in reflective chrome, perhaps acting as a mirror to the lavishly extravagant symbol of power that space programs have always embodied.

Exhibition is ongoing until December 19, 2014