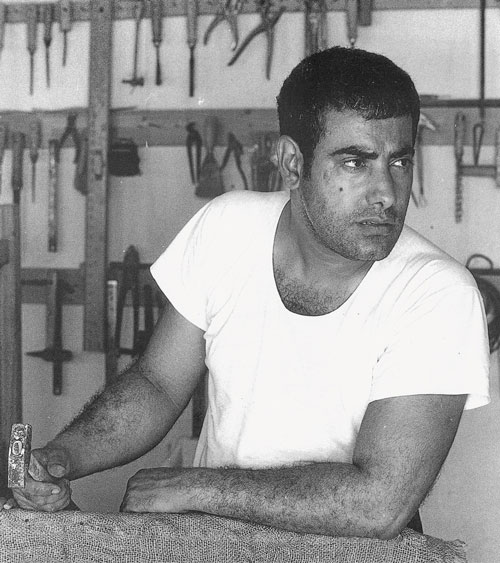 Born in 1943 in Sharq, one of the oldest quarters of Kuwait City, Sami Mohammad studied at The College of Fine Arts in Cairo from 1966 to 1970 and trained as a sculptor from 1973 to 1975 at the Johnson Atelier in New Jersey, USA. He was a founding member of both the Free Atelier in 1960 and of the Kuwait Society for Formative Arts in 1967.

This chronological exhibition highlights the entire thematic arch by the foremost sculptor in the Gulf. The sculptures on view come primarily from Mohammad’s own collection, consisting of his favorite pieces. This includes many works exhibited for the first time, beginning with his earliest ceramic pieces made in 1961 and sculptures made during his studies in Egypt. At this time, his focus was almost exclusively on the female body, such as The Water Carrier (1966), and the key piece The Hunger (1970), a phenomenal example of the prominence of the human condition in his work.

Mohammad’s major wooden sculptures, including the triptych Before Birth, Birth and After Birth, (1977) from the collections of the Kuwait National Council and the Museum of Modern Art in Kuwait, as well as the widely acclaimed artworks Penetration, An Attempt to Get Out and Sabra and Shatila made during his most prolific period in the 1980s, are also on view. These stunning sculptural pieces intimately contemplate the human form and embody the physical, emotional and psychological impact of conflict. Bodies break down walls. Faces are bound, hollow, and disturbed. The succinct brutality of form reaches far into the depths of human suffering.

While the figures here are robust and meticulously sculpted, the later One Captive and Two Martyrs marks a shift, where bodies are reduced to fragile shreds. His latest series Stop confronts the barrage of suicide car bombs that became common terrorist events in the Arab world after 2000. The human body resonates throughout Mohammed’s entire oeuvre as the most substantial means for the representation of hardship and perseverance. His work reflects his belief that the human being always maintains the power to overcome oppression. If one strives for freedom, it is possible to be free.

Exhibition is ongoing until 14th of June, 2015
Curated by Abed Al Kadiri.

CAP: Keep your eyes on the Wall PALESTINIAN LANDSCAPES
Dar Al Funoon Gallery: Fresh by Karim Ghidinelli
Sultan Gallery: Take me to this place: I want to do the memo...