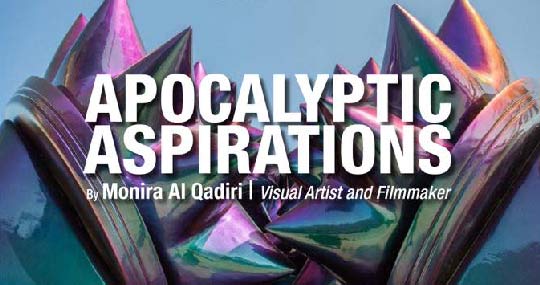 The Center for Gulf Studies (CGS) and the Department of Art & Graphic Design at the American University of Kuwait (AUK) present a lecture entitled : Apocalyptic Aspirations by Monira Al Qadiri.

In the Gulf today, we are in midst of adjusting to a new reality: cheap oil. It may be a passing flash in the pan moment of a world economy, or it could become an ongoing phenomenon harboring very serious and transformative effects for the region as whole. In her work and research, Monira Al Qadiri has pre-emptively imagined scenarios of what cultural life will look like in pre- and post-oil worlds in the Gulf, using an extreme and radical visual language. In this talk she will go through the different “apocalyptic” inspirations that lead to this field of interest, and show video, text, color and and sound that are the outcomes of her forecast for the future here.

Monira Al Qadiri is a Kuwaiti visual artist and filmmaker born in Senegal and educated in Japan. In 2010, she received, a Ph.D. In Intermedia Art from Tokyo University of the Arts, where her research focused on aesthetics of sadness in the Middle East region stemming from poetry, music, art and religious practices. Her work explores the relationship between narcissism and masculinity, as well as other dysfunctional gender roles. She is currently expanding her practice towards social and political subjects. Al Qadiri has taken part in exhibitions and film screenings in Tokyo, Kuwait, Beirut, Dubai, Berlin, New York, and Moscow, among the others. She is also part of the collective GCC, which recenlty held a solo exhibition at MoMA PS1 in 2014.