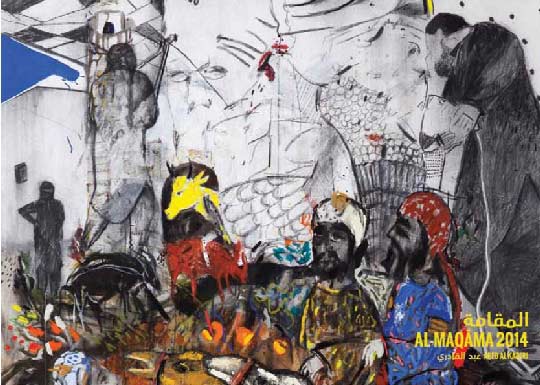 One year ago, after receiving the new limited edition print of the original “Maqamat Al-Hariri” based on the manuscript found in the Bibliothèque Nationale in Paris, the Lebanese artist, Abed Al Kadiri, began working on a series of paintings paying homage to Yahya Al Wasiti (13th-century Arab artist who produced exceptional and dazzling illustrations to accompany the Maqamat (Rimed Prose) of Al Hariri (1054-1122). It soon became a project and a statement in which the destruction of Iraq’s historical monuments – particularly the destruction of the Mosul Museum in February – had a huge impact on Al Kadiri.

Those images and videos that recorded the destruction in all its aggressiveness and violence had the exact opposite impact on him than Al Wasiti’s illustrations. The latter mimic life, art, and beauty while the former glorifies violence and mutilation, and although Al Kadiri insisted on ignoring it, it somehow managed to seep through onto the surface of his canvas through the charcoal sticks that resemble those images in their severity, fragility, and transience. The act of destroying with its images of falling monuments and rising dust clouds resembles the effect of the charcoal stick as it reacts and moves, falling and rising swiftly upon the surface of the canvas. With one puff everything disappears including the political reality and ideology underpinning the destructive machine decimating the historical and civilizational heritage of our region.

In his essay about this body of work Charbel Dagher wrote:

“Abed Al Kadiri does not mimic Al-Wasiti’s art, rather he reclaims, over the surface of the canvas, many of the compositional elements and figurative shapes that define Al-Wasiti’s illustrations on paper. AlKadiri ‘pays homage’ to Al Wasiti in that he ‘discovers’ him and ascertains the foundational depths of the artist’s experience, for Al Kadiri implicitly alludes to the fact that, like AlWasiti before him, he is establishing a living and dynamic relation with his own times.

If this relation is both obvious and necessary between the artist and his times today, it was not so between Al Wasiti and his time. This is what Al Kadiri discovered in the folds of some of his paintings, for he creates out of them a scene that has visual, historical, and social references. This means that Al Kadiri, like Al Wasiti, establishes a dynamic relation with his times. This belies the claim that pre-modern Islamic was cold, decorative and stylistically static. This is why one can say that what Abed Al Kadiri has done in the scope of his paintings is a process of deep emotional engagement and that what is still latent and concealed is much stronger than what is announced, revealed, and suggested.

He watches the news reports on television that explode with images of destruction and human suffering or peruses through the latest print edition of Al-Wasiti’s original illustrations (preserved in the Bibliotheque National in Paris and published by the Iraqi artist Dia Azzawi) and suddenly his contemporary culture [that is suffused with violent events] fuses with his peripheral vision [that has caught Al-Wasiti’s exquisite illustrations] and he responds passionately. In this, he proves that an art like his creates inasmuch as the artist is ‘situated’ in the dialectic of the living moment.

Exhibition is ongoing until October 29, 2015

Museum of Modern Art in Kuwait: Call for artists
“Graffiti in the Garden” 3rd Workshop by Visual Therapy
Adam Henein and Egyptian Sculptors – The Opening at Bo...