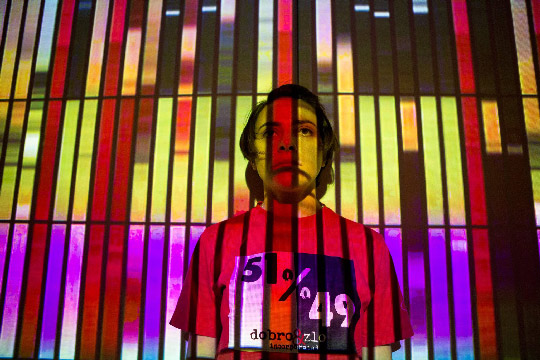 “Self-Organizaton” is a dance performance produced by an interdisciplinary team. The performance features two groups of dancers – men and women who learned how to mix in a 30-minute choreography, presented in the courtyard of the Museum. Spectators placed on the gallery overlooking the courtyard around the perimeter, attend a sequence of combinations of white, represented by men and black particles, represented by women, who are organized in surfactant molecules. Petroleum derivative, the surface active agent is the basis of many substances we use every day, including cleaning products. During the performance of the simple molecular structures, made from petroleum, wherein the black particles gather at one side of the structure opposite to the white particles, are gradually replaced by substantially more complex construction, as those we can draw from the plant.
The work features the language of dance and design of traditional clothing to question this artificial reality and try to offer an alternative.

In the modeling of this alternative proposal, the white particles and black particles form sophisticated channels, in which they are alternated. It is also a metaphor for change in the quality of human relations in a changing society, giving more and more space to women, and where grows the role of civic responsibilities.

Invited to Kuwait in 2014 by the National Council of Culture, Arts and Letters, Olga Kisseleva was impressed by the omnipresence of oil in this country – oil money, petroleum spirit, petroleum odor oil platform across the horizon. Developed in recent decades, through exploration of this unique resource, the country feels like a mirage in the desert. The most frequented areas of the country are huge shopping centers, commercial districts built as assemblies worldwide (Boulevard Haussmann crosses 5th Avenue … but both are entirely plastic), air conditioned in transparent bubbles. Amazing crowds will make their luxury goods shopping and high fashion outfits: groups of men in white dishdashas snow covered heads ghutras, also white, and the group of women abayas, large black capes silky leaving glimpse their eyes.

This amazing fact, rooted in the strict tradition, inspired by the over-consumption of raw resources as the most refined products, but more disturbing than reassuring because – without a future, is characteristic of all countries of the world that tend to a mono-exporting rentier economy.

As we know now, there remain only a few years of oil consumption. From numerous alternatives are now developing in the field of energy: solar, wind, hydrogen … But the chemical industry, from which the most common consumer items, also based on the oil, still struggling to find sufficient resources and viable alternatives to this raw material. One of the tracks could be the new organic chemistry based on plants and microorganisms, some properties are changed to nano-scale utilities to optimize their quality.

Olga Kisseleva is an artist and Professor at the University of Paris I Panthéon Sorbonne, director of Arts&Sciences in the Laboratory of the University of Paris I Panthéon Sorbonne.
Professor Olga Kisseleva focus its field operations on the creation of multidisciplinary particularly in the field of art and science. Olga Kisseleva presented a lot of exhibitions in art and science and the most important exhibition is for nanotechnology a reflection and transformation through photosynthesis and nanotechnology. 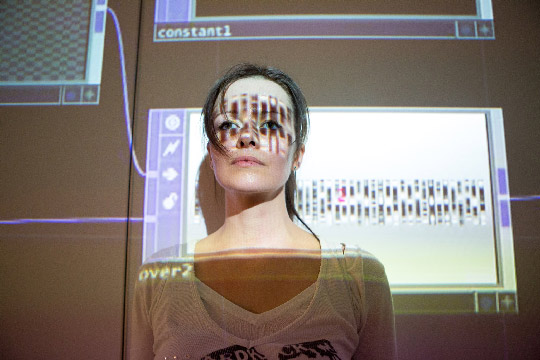 Exhibition is ongoing until 18th of February, 2016